Bicknell is a town along State Route 24 in Wayne County, Utah, United States. As of the 2010 census, the town population was 327. 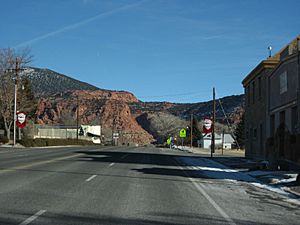 Bicknell was originally called Thurber, or "Thurber Town", for A.K. Thurber, who in 1879 built the first house in the area. In 1897 the town moved to a new location due to sandy soil and poor water conditions.

In 1914 Thomas W. Bicknell, a wealthy eastern author, historian, and Education Commissioner for Rhode Island, offered a thousand-volume library to any Utah town that would rename itself after him. The town of Grayson also wanted the library prize, so in a compromise in 1916, Grayson took the name of Blanding, Mr. Bicknell's wife's maiden name, as a tribute to her parents. The two towns split the library, each receiving 500 books.

According to the United States Census Bureau, the town has a total area of 0.62 square miles (1.6 km2), all of it land. It is situated at an altitude of 7,125 feet (2,172 m) above sea level, in the Rabbit Valley in south-central Utah. The Fremont River flows through the valley, which lies between 11,305-foot (3,446 m) Thousand Lake Mountain to the north and 11,317-foot (3,449 m) Boulder Mountain to the south. Fishlake National Forest is to the north, and Dixie National Forest is to the south. The Capitol Reef National Park Visitors Center is 17 miles (27 km) to the east.

According to the Köppen Climate Classification system, Bicknell has a semi-arid climate, abbreviated "BSk" on climate maps.

There were 126 households out of which 38.1% had children under the age of 18 living with them, 62.7% were married couples living together, 8.7% had a female householder with no husband present, and 24.6% were non-families. 21.4% of all households were made up of individuals and 10.3% had someone living alone who was 65 years of age or older. The average household size was 2.80 and the average family size was 3.23.

All content from Kiddle encyclopedia articles (including the article images and facts) can be freely used under Attribution-ShareAlike license, unless stated otherwise. Cite this article:
Bicknell, Utah Facts for Kids. Kiddle Encyclopedia.