Price is a city in the U.S. state of Utah and the county seat of Carbon County. The city is home to Utah State University Eastern, as well as the USU Eastern Prehistoric Museum. Price is located within short distances of both Nine Mile Canyon and the Manti-La Sal National Forest.

The population was 8,715 at the 2010 census, making it the largest city in Carbon County.

Price is located in west-central Carbon County at the northwestern edge of the Colorado Plateau. According to the United States Census Bureau, the city has a total area of 5.1 square miles (13.1 km2), all land. The Price River, a tributary of the Green River, flows southeasterly through the city, and the San Rafael Swell is to the south.

Price was one of the communities that was served by the Rio Grande Zephyr passenger train. Today Amtrak's California Zephyr passes once a day each direction with a station about seven miles away in Helper.

Price is located in an arid climate and features cold winters and relatively moderate summers. The average high in January is 37 °F or 2.8 °C and it rises to 90 °F or 32.2 °C in July. The low in January averages just 13 °F or −10.6 °C, and even in summer the dry climate keeps the nights cool, with an average of just 58 °F or 14.4 °C. The all-time record high is 110 °F (43.3 °C), which was set on August 3, 1918, while the all-time low is −31 °F (−35 °C), set on December 26, 1924. Price lies in the rain shadow of central Utah’s Wasatch Mountains so that precipitation averages only 9.24 inches or 234.7 millimetres annually. Late summer and early fall are the wettest times of year due to the Gulf of California monsoon that brings scattered thunderstorms to the region. The city also sees frequent snow during winter and early spring.

This climatic region is typified by large seasonal temperature differences, with warm to hot (and often humid) summers and cold (sometimes severely cold) winters. According to the Köppen Climate Classification system, Price has a cool semi-arid climate, abbreviated BSk on climate maps.

As of 2015 the largest self-reported ancestry groups in Price, Utah are: 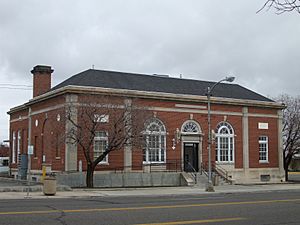 The post office in Price is one of 12 sites listed on the National Register of Historic Places.

There are two public elementary schools in Price (Creekview and Castle Heights); one middle school (Mont Harmon); one high school (Carbon); and one alternative high school (Lighthouse). It is also the location of the charter Pinnacle Canyon Academy, which serves grades K-12, as well as the Castle Valley Center for disabled children. Some children located in the Gordon Creek area attend Sally Mauro Elementary in Helper.

Price is the location of Utah State University Eastern, which has an enrollment of approximately 2,700.

All content from Kiddle encyclopedia articles (including the article images and facts) can be freely used under Attribution-ShareAlike license, unless stated otherwise. Cite this article:
Price, Utah Facts for Kids. Kiddle Encyclopedia.