Navajo County is located in the northern part of the U.S. state of Arizona. As of the 2010 census, its population was 107,449. The county seat is Holbrook.

Navajo County was split from Apache County on March 21, 1895. The first county sheriff was legendary gunman Commodore Perry Owens, who had previously served as the sheriff of Apache County. It was the location for many of the events that played out during the Pleasant Valley War.

Many people think that Arizona is a vast, open desert without vegetation. However, Navajo County offers not only the Monument Valley, but Keams Canyon, part of the Petrified Forest National Park, and the largest stand of Ponderosa Pines in North America. 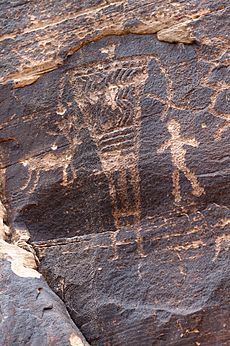 Navajo County is among the most religiously diverse places in the United States. A 2020 census by the Public Religion Research Institute (unconnected to the official US census) calculates a religious diversity score of 0.876 for Navajo County, where 1 represents complete diversity (each religious group of equal size) and 0 a total lack of diversity. Only three other counties in the US have higher scores, all much more urban than Navajo County.

The following public-use airports are located within the county:

The population ranking of the following table is based on the 2010 census of Navajo County.

School districts that serve the county include:

There is a tribal elementary school called Little Singer Community School, affiliated with the Bureau of Indian Education (BIE). Hataalii Yazhi, a medicine man, in the 1970s proposed establishing the school so area children did not have to travel far for their education. The school was named after him. The original buildings used two geodesic domes as features. In 2014 the school had 81 students. By 2014 the original campus was described by the Associated Press as being in poor repair. In 2004 the school first asked the BIE to get funding for a new building. The current campus had a cost of $28 million and an area of 32,000 square feet (3,000 m2). It uses intersecting circles as an architectural feature. The current building was dedicated in November 2020. It is physically in an unincorporated area 6 miles (9.7 km) southeast of Birdsprings, and has a postal address of Winslow.

All content from Kiddle encyclopedia articles (including the article images and facts) can be freely used under Attribution-ShareAlike license, unless stated otherwise. Cite this article:
Navajo County, Arizona Facts for Kids. Kiddle Encyclopedia.