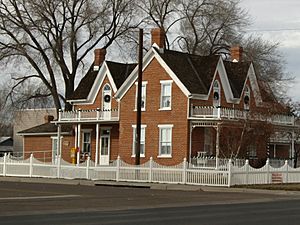 Snowflake is a town in Navajo County, Arizona, United States. It was founded in 1878 by Erastus Snow and William Jordan Flake, Mormon pioneers and colonizers. It has frequently been noted on lists of unusual place names. According to 2012 Census Bureau estimates, the population of the town is 5,564.

Snowflake is 25 miles south of Interstate 40 (formerly U.S. Route 66) via Highway 77. The Apache Railway provides freight service, from 1961 to 2012 serving the Snowflake Mill.

There were 1,312 households out of which 46.5% had children under the age of 18 living with them, 69.5% were married couples living together, 9.1% had a female householder with no husband present, and 18.4% were non-families. 15.8% of all households were made up of individuals and 6.7% had someone living alone who was 65 years of age or older. The average household size was 3.37 and the average family size was 3.81.

Recently, the town and surrounding area have experienced steady growth, primarily to the east, west and south. An additional 9-holes were added to the 18-hole golf course where the Snowflake Arizona Temple was built by The Church of Jesus Christ of Latter-day Saints in 2002. To the east of town, a substantial community of individuals suffering from multiple chemical sensitivity syndrome (MCS) has grown since the 1980s. As of July 2016 there were approximately 20 households comprising this community of individuals.

All content from Kiddle encyclopedia articles (including the article images and facts) can be freely used under Attribution-ShareAlike license, unless stated otherwise. Cite this article:
Snowflake, Arizona Facts for Kids. Kiddle Encyclopedia.