Erastus Snow (November 9, 1818 – May 27, 1888) was a member of the Quorum of the Twelve Apostles of The Church of Jesus Christ of Latter-day Saints (LDS Church) from 1849 until his death. Snow was also a leading figure in Mormon colonization of Arizona, Colorado, and New Mexico.

Born in St. Johnsbury, Vermont, Snow joined the institutional predecessor of the LDS Church, the Church of Christ, in the early 1830s. One of the missionaries who taught him was Orson Pratt. Snow's brothers, William and Zerubbabel Snow, joined the church prior to his joining.

Snow moved to Kirtland, Ohio, where the church was headquartered, but spent much of his time on missions, primarily in Pennsylvania. He later served a mission to Salem, Massachusetts, where he baptized several converts, including Nathaniel Ashby, a man with whom he shared a duplex when they both resided in Nauvoo, Illinois.

Snow was in the first Mormon pioneer company to journey to the Salt Lake Valley. He and Orson Pratt were the first two Mormons to enter the Valley.

Snow was ordained a member of the Quorum of the Twelve Apostles on February 12, 1849. On the same day, Charles C. Rich, Lorenzo Snow, and Franklin D. Richards were ordained. 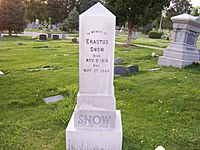 At the October 1849 general conference, Snow was assigned to lead a mission to Scandinavia. He had as a companion a Danish convert, Peter O. Hansen, who had joined the church in Boston. They focused most of their efforts in Denmark, but another convert had joined them, John E. Forsgren, who preached in Sweden.

While serving as a missionary in Denmark, Snow baptized the first Icelanders to join the church, ordained them to the priesthood, and sent them to Iceland to preach. Before the end of his mission, Snow began the publication of a church periodical in Danish.

Later in the 1850s, Snow served as the presiding church authority in the midwest United States, using St. Louis as his headquarters. He returned to Utah Territory in 1857 and engaged in farming.

In 1860, Snow went with Orson Pratt on a mission to the Eastern States. By the time they reached the Eastern United States, Abraham Lincoln had been elected president. With the impending war, they were able to convince many church members to move to Utah. Much of this migration happened in 1861 after the American Civil War had begun.

After returning to Utah in 1861, Snow was made the apostle in charge of the Southern Utah Mormon settlements. He lived in St. George, and later founded Kingman and Snowflake, Arizona.

Erastus Snow is known to have had four wives. One of Snow's daughters, Elizabeth, became the wife of Anthony W. Ivins and the mother of Antoine R. Ivins.

Snow Canyon State Park (near St. George, Utah), Snow College (in Ephraim, Utah) and the town of Snowflake, Arizona are named after Snow.

All content from Kiddle encyclopedia articles (including the article images and facts) can be freely used under Attribution-ShareAlike license, unless stated otherwise. Cite this article:
Erastus Snow Facts for Kids. Kiddle Encyclopedia.