St. Johnsbury (known locally as "St. J") is the shire town (county seat) of Caledonia County, Vermont, United States. As of the 2020 census, the population was 7,364. St. Johnsbury is situated on the Passumpsic River and is located approximately six miles northwest of the Connecticut River and 48 miles (77 km) south of the Canada–U.S. border.

St. Johnsbury is the largest town by population in the Northeast Kingdom of Vermont and has long served as a commercial center for the region. In 2006, the town was named "Best Small Town" in National Geographic Adventure's "Where to live and play" feature. The more densely settled southern one-third of the town is defined by the U.S. Census Bureau as the St. Johnsbury census-designated place, where over 81% of the population resides. 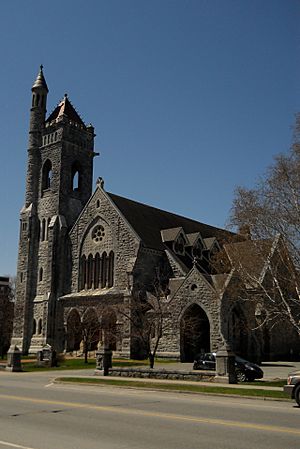 The U.S. Census Bureau refers to the most developed portion of the town as a census-designated place (CDP).

Green Mountain Mall is a shopping mall north of downtown St. Johnsbury on U.S. Route 5. The anchor store is JCPenney. On December 16, 2020, it was announced that JCPenney would be closing as part of a plan to close 15 stores nationwide. The store closed in May 2021. 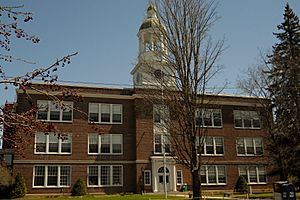 The following roads facilitate traffic: Interstate 91, Interstate 93, U.S. Route 2, U.S. Route 5 and Vermont Route 2B. Three exits from Interstate 91 serve the town. The northern terminus of Interstate 93 is at I-91 at the southern border of the town, and I-93 Exit 1, while just over the line in the town of Waterford, serves the eastern side of St. Johnsbury.

All content from Kiddle encyclopedia articles (including the article images and facts) can be freely used under Attribution-ShareAlike license, unless stated otherwise. Cite this article:
St. Johnsbury, Vermont Facts for Kids. Kiddle Encyclopedia.