Concord is a town in Essex County, Vermont, United States. The population was 1,235 at the 2010 census. It is part of the Berlin, NH–VT Micropolitan Statistical Area.

Concord was chartered on September 15, 1780, to Reuben Jones and others from Rockingham, Vermont. Concord was first settled by Simon Willard, a fur trader, and two other men. It gets its name from Concord, Massachusetts.

Concord is the southernmost town in Essex County. It is bordered to the west by three towns in Caledonia County: Waterford to the southwest, St. Johnsbury at the westernmost point of Concord, and Kirby to the northwest. The Essex County towns of Victory and Lunenburg are to the north and east, respectively. The southern edge of the town borders the Connecticut River, which forms the state boundary with New Hampshire. To the southeast is the town of Dalton in Coos County, New Hampshire, and to the south is the town of Littleton in Grafton County, New Hampshire. There are no crossings of the Connecticut River from Concord.

According to the United States Census Bureau, the town has a total area of 53.5 square miles (138.6 km2), of which 51.3 square miles (132.9 km2) is land and 2.2 square miles (5.7 km2), or 4.10%, is water. Much of the water surface is in the Connecticut River impoundment of Moore Reservoir. Miles Pond, in the eastern part of town, is the next largest water body, and Shadow Lake is in the southwest. 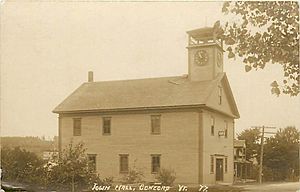 All content from Kiddle encyclopedia articles (including the article images and facts) can be freely used under Attribution-ShareAlike license, unless stated otherwise. Cite this article:
Concord, Vermont Facts for Kids. Kiddle Encyclopedia.