Danville was established on October 31, 1786, by the Vermont Legislature, making it one of the last towns to be created in Caledonia County.

The town was named for the 18th-century French cartographer Jean Baptiste Bourguignon d'Anville.

A Debtors' prison was located here in the late 18th to the early 19th centuries.

A thief in West Danville made national news in 2008 when he apologized for robbing a convenience store and left a roll of one-dollar bills to allow the store to open up the next morning.

The annual convention of the American Society of Dowsers is held in Danville. 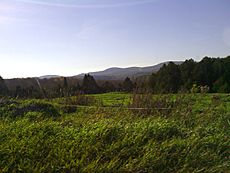 Scenery typical of the Danville area in mid-October.

Danville is located west of St. Johnsbury, Vermont. Other towns bordering Danville are Barnet to the southeast, Peacham to the south, Cabot and Walden to the west, Stannard to the northwest, Wheelock to the north, and Lyndon to the northeast, touching Danville at a single corner. According to the United States Census Bureau, the town has a total area of 61.1 square miles (158.3 km2), of which 60.7 square miles (157.3 km2) is land and 0.42 square miles (1.1 km2), or 0.67%, is water. The main village in town (not separately incorporated) comprises the Danville CDP, with an area of 1.0 square mile (2.7 km2), all land.

U.S. Route 2 runs through the town, connecting St. Johnsbury to the east with Montpelier 26 miles (42 km) to the west. In West Danville the two-lane highway passes Joes Pond (named after Indian Joe), which extends into Cabot. Vermont Route 15 leaves US-2 in West Danville, heading northwest towards Hardwick and Morrisville.

The highest point in Danville is a 2,365-foot (721 m) summit on the ridge of the Kittredge Hills along the western border of the town.

This climatic region is typified by large seasonal temperature differences, with warm to hot summers and cold winters. According to the Köppen Climate Classification system, Danville has a humid continental climate, abbreviated "Dfb" on climate maps.

There were 871 households, out of which 32.5% had children under the age of 18 living with them, 62.0% were married couples living together, 8.2% had a female householder with no husband present, and 28.0% were non-families. 23.1% of all households were made up of individuals, and 10.6% had someone living alone who was 65 years of age or older. The average household size was 2.52 and the average family size was 2.96.

The only major body of water in the town is the Joe's Pond, which covers 396 acres (160 ha) and is partially in Danville and partially in neighboring Vermont to the west. The pond, an impoundment of the brook in West Danville, is the largest of the six bodies of water in the Joe's Brook watershed, which is in turn part of the Passumpsic River watershed. Game fish in the pond include lake trout, smallmouth bass, northern pike (which were illegally introduced), rainbow smelt, rock bass, pumpkinseed, chain pickerel, yellow perch, and brown bullhead. Plant species in the pond include the common mare's tail (Hippuris vulgaris) and the small bur-reed (Sparganium natans).

The Greenbanks Hollow Covered Bridge, one of Vermont's many covered bridges, traverses Joe's Brook and lies within the Danville town boundaries. The covered bridge was built in 1886 and restored in its original condition in the early 2000s. The bridge is owned by the Town of Danville, has a queen post truss, and is 74 feet, 9.5 inches in length and 14 feet, 6.5 inches in width.

Danville School is the town's public school but is open to tuition students from surrounding towns. It serves preschool through grade 12, totaling to approximately 400 students. The school is located at 148 Peacham Road, Danville, Vt 05828 and is a part of the Danville School District. The school was established in 1990 to replace the North Danville School.

All content from Kiddle encyclopedia articles (including the article images and facts) can be freely used under Attribution-ShareAlike license, unless stated otherwise. Cite this article:
Danville, Vermont Facts for Kids. Kiddle Encyclopedia.