Lyndon is a town in Caledonia County, Vermont, United States. As of the 2020 census, the population was 5,491. Lyndon is the home of Lyndon State College. The town contains one incorporated village, Lyndonville, and four unincorporated villages: Lyndon Corner in the south, Lyndon Center in the center of town on the west side of Lyndonville, Little Egypt in the north, and East Lyndon in the southeast.

Lyndon is the second-most populous town in the Northeast Kingdom; only neighboring St. Johnsbury is larger. It is also the fastest growing town in Vermont with a population over 5,000, growing 9.8% in the decade preceding the 2010 census.

When Rhode Island proprietors secured the original Lyndon township grant, the area was covered in forests and woodlands. The Passumpsic River, flowing through the center of the town, provided power for grist and saw mills. The charter of the town of Lyndon was signed by Governor Thomas Chittenden in 1780.

It seems likely that the name Lyndon was chosen to honor Josias Lyndon (1704–1778), a former governor of Rhode Island and friend of many of the proprietors. Many of these men served with the 2nd Rhode Island Regiment, 1st Division, including Israel Angell. The original proprietors secured the grant as a business venture and had no intention of settling it. Some of the men held high positions of rank, including Jonathan Arnold, William Greene, and James Manning,the President of Rhode Island College, later Brown University. They needed men in search of free land, who would clear each proprietor's grant in return for a portion of it. The town was surveyed in 1781 by Jonathan Arnold, Daniel Cahoon and Daniel Owen. Settlement began in 1789. By the 1790 census, twelve families with 59 residents made their homes in Lyndon. These families installed roads, mills, homes, barns, fields, crops, churches, and schools.

During a centennial celebration in 1891 an iron box was buried as a time capsule but could not be found during a 1991 ceremony.

Lyndon is located in the valley of the Passumpsic River in northeastern Vermont. It is bordered by the town of St. Johnsbury to the south, Danville to the southwest, Wheelock to the west, Sutton to the north, Burke to the northeast, and Kirby to the east. According to the United States Census Bureau, the town has a total area of 103.1 square kilometres (39.8 sq mi), of which 39.5 square miles (102.2 km2) is land and 0.35 square miles (0.9 km2), or 0.89%, is water.

The highest point in Lyndon is Diamond Hill in the southwest, with an elevation of slightly greater than 1,640 feet (500 m).

Lyndonville, the main village in town, is partially located on a high kame terrace. This may have once extended across the valley to form the end of a basin. Its lower strata are clayey, and are folded and curved. West of this terrace the level is lower. There is the course of a former river bed which ran towards the east. At the upper village of Lyndon the first terrace is about 1 mile (1.6 km) wide. There is a lot of sand and fine gravel adjoining.

Every stream from either side of the valley has its large terraces to correspond with those of the Passumpsic River. It is a characteristic of these terraces that they are large while their quantity is small. The count never exceeds five which is unusual. 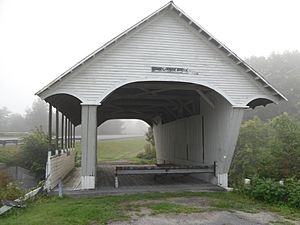 There were 2,031 households, out of which 31.6% had children under the age of 18 living with them, 50.2% were couples living together and joined in either marriage or civil union, 11.5% had a female householder with no husband present, and 34.7% were non-families. 27.0% of all households were made up of individuals, and 12.4% had someone living alone who was 65 years of age or older. The average household size was 2.43 and the average family size was 2.94. 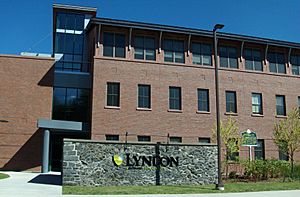 Interstate 91 and U.S. Route 5 both pass through Lyndon from north to south. I-91 has two exits within town. Vermont Route 114 meets U.S. 5 in the village of Lyndonville and runs to the northeast.

All content from Kiddle encyclopedia articles (including the article images and facts) can be freely used under Attribution-ShareAlike license, unless stated otherwise. Cite this article:
Lyndon, Vermont Facts for Kids. Kiddle Encyclopedia.