Lyndonville is a village in the town of Lyndon, in Caledonia County, Vermont, United States. Lyndonville's population was 1,136 at the 2020 census. It is the closest community to the Lyndon campus of Northern Vermont University.

In 1883, trustees purchased a hand fire engine from Franklin, New Hampshire, to start a fire fighting company. The fire department volunteers named themselves the "Tiger Fire Company No. 1" and appear in parade uniform for photos starting in 1889.

In 1931, a Boston paper reported that the town had become a haven for "Rum Running Gangsters!"

Lyndonville is located 8 miles (13 km) north of St. Johnsbury and 35 miles (56 km) south of Newport, Vermont. U.S. Route 5 passes through the center of the village, and Interstate 91 bypasses it to the west, with access via Exit 23. 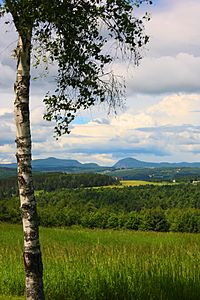 The town has a bronze statue, a copy of the Florentine Boar by Tacca, which is also a fountain. As water gushes continually from the pig's mouth, the local copy is known fondly as the "puking pig".

A community fair has been held annually continuously since 1932. In 2009, Boston magazine named it one of 15 "Best Small Towns" in New England. 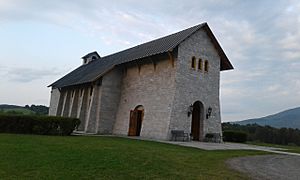 The Chapel of the Holy Family

All content from Kiddle encyclopedia articles (including the article images and facts) can be freely used under Attribution-ShareAlike license, unless stated otherwise. Cite this article:
Lyndonville, Vermont Facts for Kids. Kiddle Encyclopedia.