Hardwick is a town in Caledonia County, Vermont, United States. The population was 2,920 at the 2020 census. It contains the unincorporated villages of Hardwick, East Hardwick, and Mackville. The town is a commercial center for the region's farming population.

The main settlement of Hardwick in the center of the town, formerly an incorporated village, is since 1988 a census-designated place (CDP), with a population of 1,269 at the 2020 census.

During the Revolutionary War, General George Washington ordered construction of the Bayley-Hazen Military Road to provide access into the interior of Vermont. It would prompt the development and settlement of Hardwick and East Hardwick.

The town was granted by the Vermont General Assembly on November 7, 1780, then chartered on August 19, 1781, to Danforth Keyes and 66 others, some of whom were from Hardwick, Massachusetts. Permanent settlement began in 1793 when several families named Norris arrived from New Hampshire. By 1859, when the population reached 1,402, the town had several sawmills and gristmills on the Lamoille River. There were also two tanneries. Over the years, other industries would include a woolen mill, tinware shop, and carriage factory. 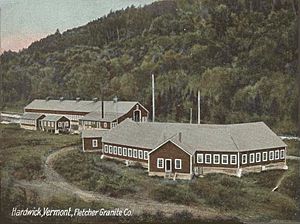 The predominant business following the Civil War was granite quarrying, especially after the Portland & Ogdensburg Railway opened service through the town and facilitated shipment of stone. While most of the granite was quarried in nearby Woodbury, the stone was dressed and finished in Hardwick, largely at "Granite Junction", where the rail lines met. Hardwick became known as the "Building Granite Center of the World". By 1906, 1,200 people were employed in the industry. Buildings around the country made with Hardwick granite include the Pennsylvania State Capitol, Chicago City Hall, and the Old Post Office Building in Washington, D.C., as well as numerous city halls and custom houses.

Hardwick Village disincorporated in 1988 and merged with the town.

In 2011, the office manager of the municipal electric department was accused of embezzling $1.6 million over a period of 12 years. The FBI investigated, and she was charged in federal court and found guilty.

Hardwick is drained by the Lamoille River and its tributaries, flowing west to Lake Champlain. The highest point in Hardwick is the summit of Jeudevine Mountain in the northern corner of the town, at 1,831 feet (558 m) above sea level. 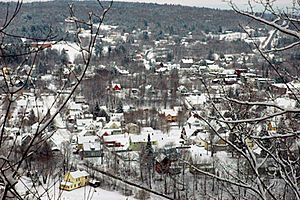 The town contains five places on the National Register of Historic Places:

Several agribusinesses active in and around Hardwick, employing techniques of sustainable agriculture, have added an estimated 75-100 jobs to the area (through 2008). They operate the Vermont Food Venture Center, a "shared-use kitchen incubator for value-added and specialty food producers." The facility should generate the equivalent of 16 full-time jobs when fully operational.

A gathering of the Society for Creative Anachronism has been an annual event.

On the last weekend in May, there is a Memorial Day parade, craft fair, and running race.

All content from Kiddle encyclopedia articles (including the article images and facts) can be freely used under Attribution-ShareAlike license, unless stated otherwise. Cite this article:
Hardwick, Vermont Facts for Kids. Kiddle Encyclopedia.