Greensboro is the southernmost town in Orleans County, Vermont, United States. The population was 811 at the 2020 census. The town includes the places of Campbells Corners, East Greensboro, Gebbie Corner, Greensboro Four Corners, Greensboro Bend, Tolman(s) Corner, and Burlington Point. Greensboro Bend and the central village of Greensboro are classified as census-designated places.

Greensboro was chartered in 1781. The town was named for Timothy Green, one of the original charter recipients and an original landowner under the charter. However, there is no evidence that he ever visited the town, and his land was sold for non-payment of taxes a few decades after he received it.:13-14 Only three of the original proprietors settled in the town; most likely, the others were land speculators who sold their land to others or let it be sold at tax sales when buyers could not be found.:18

The Bayley Hazen Military Road, built before the town was chartered, allowed its development. The road passed to the west of Caspian Lake, and a wooden blockhouse was constructed there in 1779:21-22 on what is now known as Block House Hill:frontispiece. In 1781, the blockhouse's party of four was attacked by Abenaki; two were killed and two were captured.:22-23 A second road was built by Timothy Hinman between 1791 and 1793. This road, which came to be known as the Hinman Settler Road, branched off from the Bayley-Hazen in Greensboro and continued to Derby. These two roads were of major importance to the settlement of northern Vermont.:23

The town sent many soldiers to fight in the Civil War. Of eight prisoners of war from the town, confined to Andersonville Prison, one returned.

In the early 20th century, a development near the Highland Lodge contained restrictive covenants in the title forbidding subsequent resale to Jews. These restrictions were found to be illegal by the US Supreme Court in 1948.

The Highland Lodge opened in 1954. It had a hotel and restaurant that was open year-round. It had a beach on Caspian Lake with sailboats, kayaks, and canoes; a children's play programs and nature programs in the summer and nature hikes and cross-country ski trails in the winter. Special events included wedding, business retreats, music programs, workshops, and talks. It closed once in 2011 but is now open for room and cottage rentals only. The Highland Lodge and property are also for sale.

The town includes Caspian Lake and most of Eligo Pond, also known as Lake Eligo.

There were 313 households, out of which 28.4% had children under the age of 18 living with them, 57.2% were married couples living together, 8.3% had a female householder with no husband present, and 31.3% were non-families. 27.2% of all households were made up of individuals, and 16.0% had someone living alone who was 65 years of age or older. The average household size was 2.37 and the average family size was 2.84.

The Greensboro Association was founded in 1934 with a mission to conceive, advance, and support village initiatives and organizations that enhance our community and to protect Caspian Lake and its surrounding environment for both full and part-time residents of the Town of Greensboro.

Greensboro was the setting of a short film called The Abels House is Green directed by part-time resident Duncan M. Rogers.

The hub of town is a general store called Willeys.

The Green Mountain Monastery, a community of women, was formed here in 1999. 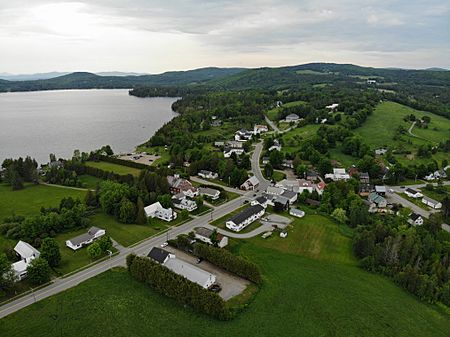 Aerial photo of Greensboro, Vermont with Caspian Lake in the background

Greensboro has the highest per capita income in Orleans County for a town. Newport city is higher. Greensboro's income ranks it 129th out of 282 census areas in Vermont.

Circus Smirkus, a non-profit youth circus, is based here. The company was founded in Greensboro by Rob Mermin in 1987.

The Greensboro Arts Alliance and Residency (GAAR), the summer wing of The Mirror Theater Ltd, was formed here in 2005 to mix professional Mirror Repertory Company members with local community members. In 2016, GAAR performed the American premiere of Joshua Sobol's Sinners, directed by Brian Cox, in Greensboro.

Jasper Hill Farm was awarded "Best Unpasteurized Cheese" for its Bayley Hazen Blue at the 2014 World Cheese Awards in London.

Caspian Lake is surrounded by cottages, many available for summer rental. The lake is used for boating, sailing and fishing. There is a public beach at the south end, in town, with a boat ramp. There are two inns in town, Highland Lodge, which rents rooms and cottages, and Lakeview Inn, which holds group events.

Greensboro has a nine-hole golf course, Mountain View, since circa 1895, with views of the lake and Mount Mansfield.

All content from Kiddle encyclopedia articles (including the article images and facts) can be freely used under Attribution-ShareAlike license, unless stated otherwise. Cite this article:
Greensboro, Vermont Facts for Kids. Kiddle Encyclopedia.