Craftsbury is a town in Orleans County, Vermont, United States. The population was 1,343 at the 2020 census. The town includes the unincorporated villages of Craftsbury, Craftsbury Common, Mill Village, North Craftsbury, and East Craftsbury.

The state granted the town to Ebenezer Crafts, Timothy Newell, and sixty-two associates, on November 6, 1780. They named it Minden. It was changed to Craftsbury, in honor of Ebenezer Crafts, on October 27, 1790. Crafts was the first settler in the county.

North Craftsbury was settled by the earliest pioneers, and was for many years the center of business and trade, not only for Craftsbury, but for Eden, Lowell, Albany, and portions of the neighboring towns. Continuing trouble with American Indians led to the successive founding of Craftsbury village (in a valley), East Craftsbury (on higher ground) and Craftsbury Common (on a hilltop).

The militia was drilled here on the common while such training took place. All the public and religious meetings were held here. Along with Brownington, Craftsbury was a co-county seat until 1815 when it switched to Irasburg. Orleans county courts were held alternately at Craftsbury and Brownington. 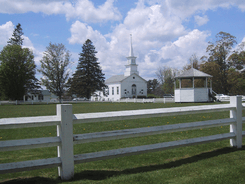 A view across Craftsbury Common showing the United Church of Craftsbury, and bandstand.

Craftsbury is on a plateau on the Catamount Trail.

There are many hills and valleys. The soil varies from alluvial meadows to clay and gravel. There are more numerous grades and varieties of soil than is usual.

There are five ponds or lakes.

Lake Elligo (also known as Eligo Pond) is partially in Greensboro. It is about two miles long and half a mile wide. Unusually, it has two outlets: one flows to the north and the other to the south. The northern outlet is one of the head branches of Black River. The southern flows through Little Elligo Pond and on to the Lamoille River in Hardwick. The eastern shore rises to cliffs. The western shore rises gradually. Near the center of the pond are two small islands. The lake was formerly a hunting-ground of the St. Francis Indians, who named it Elligo Scoloon.

The others are Great Hosmer Pond, lying partly in Albany, Little Hosmer Pond, and two other small ponds. The Black River is the main river in town. It was called Elligo-sigo by the natives. Its current is slow. The drop from its source to Lake Memphremagog, including the falls at Irasburg and Coventry, is 190 feet. Wild branch, a tributary of the Lamoille, rises in Eden and flows through the western part of the town. The valley of the Black river in Craftsbury is a muck bed averaging a quarter of a mile in width.

Geologically, the town varies in its structure to an unusual degree. There is granite in the east part of town. This alternates with gneiss and mica slate. In the central portions of town, the previous rocks are replaced by dark argillaceous slate. This alternates with siliceous limestone. These rocks are from the Devonian Period and are part of the Waits River Formation.

The rocks on the west side of the Black River also vary. These are older rocks from the Cambrian Period, Moretown Formation. State Route 14 runs along a seam where these east and west rock formation converge. Strata of mica slate, argellaceous, and chlorite slates, and limestones, alternate. An extensive deposit of gray granite is near Craftsbury village. It is broken on the surface. This rock is filled with nodules of black mica and quartz, in concentric layers. These are about one inch in diameter.

In much of the area, the biotite orbicules are so numerous that a hundred may be counted within a circle two feet in diameter. In some parts of the ledge these nodules are flattened, as if subjected to an immense vertical pressure when the mass was in a semi-fluid state. In the nineteenth century these rocks were once believed to be unique from any other found in America or Europe. Today, it is known that they resemble those found in Bethel granite.

As the last glacial period ended, part of the town became submerged under the transient Lake Winooski which drained when its ice dam melted 14,000 years ago.

There were 427 households, out of which 31.1% had children under the age of 18 living with them, 61.8% were couples living together and joined in either marriage or civil union, 5.9% had a female householder with no husband present, and 29.3% were non-families. 21.1% of all households were made up of individuals, and 9.4% had someone living alone who was 65 years of age or older. The average household size was 2.43 and the average family size was 2.82.

The Craftsbury Chamber Players have offered summer performances since 1966.

Alfred Hitchcock shot the scenery for his 1955 movie The Trouble with Harry in Craftsbury. Ostensibly, the movie takes place entirely in town. Exteriors of the parsonage beside the East Craftsbury Presbyterian Church are used as well as exterior shots of Craftsbury Common. Assuming that the town would be in full foliage, the company showed up for outdoor shots on September 27, 1954. To the filmmakers' shock, there was hardly any foliage left; to achieve a full effect, leaves were glued to the trees.

The 1976 IMAX film To Fly! a history of human flight, directed by Jim Freeman and Greg MacGillivray and produced for the Smithsonian Institution's National Air and Space Museum opens with a hot air balloon passing over the Wee House and the United Church of Craftsbury on the Common.

Vermont Route 14 passes through town near the villages of Craftsbury and Craftsbury Common.

The Craftsbury Outdoor Center has 105 kilometres (65 mi) of Nordic skiing trails, used for running in the summer months. The center is also home to the Green Racing Project, an Olympic development team with both rowing and skiing components.

The Craftsbury Sculling Center is one of the oldest sculling programs in the United States, based on Little and Big Hosmer lake.

Agritourism is an important part of Craftsbury's economy. There are several farms, orchards, greenhouses and farmstands in Craftsbury, and there is a seasonal farmer's market at the Craftsbury Common every Saturday from 10am–1pm.

Craftsbury is home to some uniquely small and historic educational institutions. Craftsbury Academy, located on Craftsbury Common is among the oldest and smallest public high schools in Vermont, and is part of the town's K–12 school system. Sterling College is nearby on Craftsbury Common and is a college of ecological thinking and action and is recognized as a Work College by the U.S. Department of Education.

Expand this section on Sterling College.

All content from Kiddle encyclopedia articles (including the article images and facts) can be freely used under Attribution-ShareAlike license, unless stated otherwise. Cite this article:
Craftsbury, Vermont Facts for Kids. Kiddle Encyclopedia.