Bethel is a town in Windsor County, Vermont, United States. The population was 2,030 at the 2010 census. The town includes the locations of Bethel village, Bethel-Gilead, East Bethel, Lilliesville, Lympus (formerly Olympus), and West Bethel. Bethel is best known for being the source of Bethel White granite which was used to build Union Station (Washington, D.C.) and the National Museum of Natural History. Bethel was the first town created by the independent Republic of Vermont in 1779 and was named after the Biblical village of Bethel.

Bethel is crossed by Interstate 89 (Exit 3 serves the town), Vermont Route 12 and Vermont Route 107. Amtrak's Vermonter train, operating daily between St. Albans and Washington, DC also passes through, but does not stop in town as it traverses the New England Central Railroad. The closest stations are Randolph to the north and White River Junction to the southeast.

Dudley Chase, a grantee, was on a surveying expedition with a group of men. The men made camp in an area near the (now)entrance to Gilead Brook road where there is a group of large moss covered rocks. The men slept on the rocks and upon waking, Dudley Chase declared that it was the best night sleeping he had just like the Biblical experience of Jacob when sleeping in a field with a stone for a pillow. In the Biblical story, Jacob named the place Beth-el (House of God). Chase's associates were so impressed that they named the town the same. 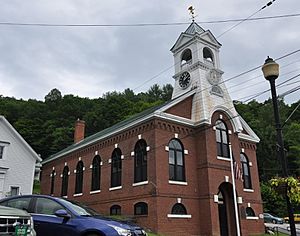 There were 817 households out of which 30.8% had children under the age of 18 living with them, 53.2% were married couples living together, 9.9% had a female householder with no husband present, and 32.9% were non-families. 25.9% of all households were made up of individuals and 10.0% had someone living alone who was 65 years of age or older. The average household size was 2.41 and the average family size was 2.87.

This climatic region is typified by large seasonal temperature differences, with warm to hot (and often humid) summers and cold (sometimes severely cold) winters. According to the Köppen Climate Classification system, Bethel has a humid continental climate, abbreviated "Dfb" on climate maps.

All content from Kiddle encyclopedia articles (including the article images and facts) can be freely used under Attribution-ShareAlike license, unless stated otherwise. Cite this article:
Bethel, Vermont Facts for Kids. Kiddle Encyclopedia.