When the area was originally settled there were three villages—Randolph Center, East Randolph and West Randolph. What is now the central village of the current town had previously been the village of West Randolph.

Vermont granted the town on November 2, 1780, when the New Hampshire settlers could not locate the original grantees, whose patents were issued by New York. It was chartered on June 29, 1781 to Aaron Storrs and 70 others, and was originally named "Middlesex."

With productive soil for cultivation, farming became an intensive industry. By 1830, when the population reached 2,743, between twelve and thirteen thousand sheep grazed its pastures. Randolph was noted for its good butter, cheese and mutton.

Two branches of the White River provided water power for watermills. By 1859, the town had three gristmills, one oil mill, and one carding mill. In 1848, the Vermont Central Railroad opened service through the town. Randolph's prosperity during the Victorian era endowed it with some fine architecture, including the Second Empire Randolph Railroad Depot and Renaissance Revival Kimball Public Library.

In 1921, Randolph was the setting for, and provided some of the cast of, a silent movie called The Offenders. In 1922 the same was true for the film Insinuation.

Today, Randolph is a thriving meeting-spot and shopping center for the surrounding area. The town is home to attractions such as the Porter Music Box Museum and the Chandler Music Hall. Also located in Randolph are the Gifford Medical Center, a hospital; Dubois & King, a civil and structural engineering firm; and Randolph Union High School, which also serves students from the neighboring towns of Braintree and Brookfield. Downtown Randolph hosts the Amtrak station, shops, restaurants, a movie theater, and several gas stations.

There were 1,769 households out of which 31.5% had children under the age of 18 living with them, 50.9% were couples living together and joined in either marriage or civil union, 9.6% had a female householder with no husband present, and 35.3% were non-families. 27.7% of all households were made up of individuals and 12.6% had someone living alone who was 65 years of age or older. The average household size was 2.45 and the average family size was 3.00. 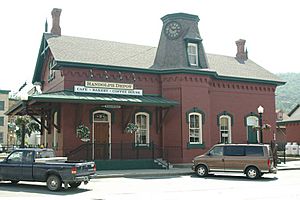 Randolph is twinned with:

All content from Kiddle encyclopedia articles (including the article images and facts) can be freely used under Attribution-ShareAlike license, unless stated otherwise. Cite this article:
Randolph, Vermont Facts for Kids. Kiddle Encyclopedia.