Randolph is an Amtrak train station in Randolph, Vermont, United States. The only train that serves the station is the Vermonter, which operates between St. Albans, Vermont and Washington, D.C. The station also contains a local restaurant. On the other side of the tracks is the depot for a private bus company, Randolph Stagecoach Transportation, essentially creating an unofficial intermodal transportation center. However, the schedules of the two systems are not aligned in any way. 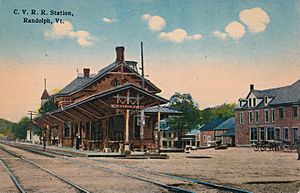 Railway service in Randolph can be traced as far back as 1843 when the Vermont Central Railroad was chartered to build a line along the Connecticut River to Lake Champlain, which was to include service in the city. The original station wasn't built until 1848 though, and by that time the VCRR was acquired by the Central Vermont Railway. By the late-1870s (although signs on the depot suggest 1881), Central Vermont moved the original depot and built a new one, converting the VCRR station into a freight house. When Central Vermont was on the verge of bankruptcy in 1896, the Grand Trunk Western Railroad, a subsidiary of Canadian National Railway bought the railroad and the station out and kept it afloat throughout most of the 20th Century.

Both passenger and freight service ended in Randolph in 1966. However a dedicated group of volunteers vowed to restore the stations and the surrounding area, even converting the second station into a café and restaurant.

Randolph Station became the centerpiece of and has been a contributing property to the Depot Square Historic District since 1975. In the 1990s local leaders began lobbying Amtrak to make Randolph a new railroad stop, even going so far as to rebuild the original VCRR freight depot into a bus depot for Randolph Stagecoach Transportation. Thirty years after the last Central Vermont train stopped in Randolph, Amtrak began using the station as a stop on the Vermonter, and has maintained that service ever since.

All content from Kiddle encyclopedia articles (including the article images and facts) can be freely used under Attribution-ShareAlike license, unless stated otherwise. Cite this article:
Randolph station (Vermont) Facts for Kids. Kiddle Encyclopedia.