The St. Johnsbury Athenaeum, in St. Johnsbury, Vermont, is a combined library and art gallery. The building in which it is housed is architecturally and historically significant because of its construction. The Athenaeum is also noted for the American landscape paintings and books in its collection and its having been funded by Horace Fairbanks, manufacturer of the world's first platform scale. The art collection contains a number of Hudson River School paintings. This building retains a strong Victorian (French Second Empire) flavor of the 19th century. 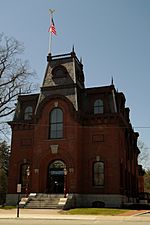 The St. Johnsbury Athenaeum in 2011

When the library opened, the collection consisted of 9,000 books selected by bibliographer William F. Poole.

The walls and floor are black walnut. The art gallery is lighted naturally from an arched skylight in the ceiling. Cases on two sides of the room contain art books in tooled leather bindings. Gilt-framed paintings are displayed.

One hundred works of art are on display. Besides originals by American artists, there are also copies of European masterpieces. The major part of the collection is by American and European artists from the late eighteenth century to the middle nineteenth century. Hudson River School painters include Asher B. Durand, Jasper Francis Cropsey, Sanford Gifford, a Luminist painter, James and William Hart pastoral landscapes with cattle. Western scenes are portrayed by Samuel Colman and Worthington Whittredge. Dominating the room is a canvas, ten by fifteen feet, of the Domes of Yosemite, by Albert Bierstadt.

The Athenaeum's library shares a unified catalog and circulation system with over 50 other Vermont libraries through the Vermont Organization of Koha Automated Libraries.

All content from Kiddle encyclopedia articles (including the article images and facts) can be freely used under Attribution-ShareAlike license, unless stated otherwise. Cite this article:
St. Johnsbury Athenaeum Facts for Kids. Kiddle Encyclopedia.