Winslow was named for either Edward F. Winslow, president of St. Louis and San Francisco Rail Road, which owned one half of the old Atlantic and Pacific Railroad, or Tom Winslow, a prospector who lived in the area.

The last Harvey House (La Posada Hotel) opened in 1930. It was designed by Mary Colter. The hotel closed in 1957 and was used by the Santa Fe Railway for offices. The railroad abandoned La Posada in 1994 and announced plans to tear it down. It was bought and restored by Allan Affeldt and it currently serves as a hotel.

U.S. Route 66 was originally routed through the city. A contract to build Interstate 40 as a bypass north of Winslow was awarded at the end of 1977. I-40 replaced U.S. Route 66 in Arizona in its entirety.

Winslow achieved national fame in 1972 in the Eagles / Jackson Browne song “Take it Easy” which has the line “standing on a corner in Winslow, Arizona." 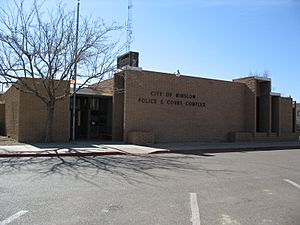 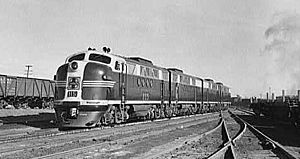 Diesel freight locomotive which has just come out of the Santa Fe roundhouse at Winslow, 1943. Photo by Jack Delano.

Winslow is served by Winslow-Lindbergh Regional Airport (IATA: INW, ICAO: KINW). Originally constructed by Transcontinental Air Transport, there is no commercial airline service here. The Winslow airport was designed by Charles Lindbergh, who stayed in Winslow during its construction. When it was built, it was the only all-weather airport between Albuquerque, New Mexico and Los Angeles, California.

The city is on BNSF Railway's Southern Transcon route which runs between Los Angeles and Chicago, Illinois. It is also a crew change point for BNSF Railway. The city also has twice-daily Amtrak service at Winslow (one train eastbound and one westbound).

Interstate 40 runs just north of Winslow; the town is on the historic U.S. Route 66. 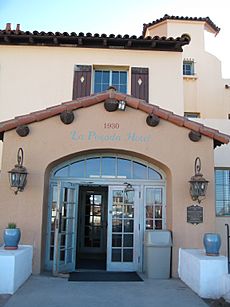 The historic La Posada hotel has been beautifully restored. It is home to acres of flower and vegetable gardens, the museum of painter Tina Mion, and the Turquoise Room, a world class restaurant and martini bar.

The nearby Meteor Crater, sometimes known as the Barringer Crater and formerly as the Canyon Diablo crater, is a famous impact crater.

In the era of wood burning steam locomotives Winslow was an important stop on the Atchison, Topeka and Santa Fe Railway for adding water and fuel to trains. Passengers could disembark and have enough time to have a meal during the extended stop. During the 1920s many celebrities chose to come west to Hollywood and when they stopped in Winslow a parade took place. The local newspaper frequently documented these special events.

Winslow was also home to a roundhouse and maintenance depot for the Sante Fe. When the station at Barstow, California was given the engineering responsibility for newer diesel locomotives, Winslow began its slow decline. Company brass moved out, as did other employees needed for such maintenance and repairs.

In 1949 when the Shah of Iran came to America and toured some sights, he chose to come to the Grand Canyon. His plane landed at the Winslow airport and they took land transport to get to the canyon.

Winslow is also home to the 9-11 Remembrance Gardens, a memorial honoring those who lost their lives during the September 11 attacks. The memorial was constructed using two beams recovered from the wreckage of the World Trade Center towers in New York City.

The 9-11 Memorial in Winslow is a result of the efforts of Bill Herron and Councilwoman Dee Rodríguez, along with a committee, planning for a remembrance. There was news of beams from the Trade Center towers' wreckage being given away and the persons in charge of the wreckage were contacted and agreed to give Winslow beams of 14 and 16 foot length.

Walmart supplied the transportation to Winslow. A large number of citizens donated time and money to the erection of the memorial, which was in place and celebrated on the first anniversary of the event, September 11, 2002. The memorial is at the corner of Transcon Lane and old Route 66 near the Flying J Truck Stop. 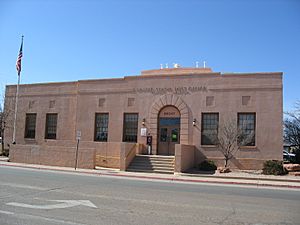 Winslow was referenced in the popular 1972 song "Take It Easy" written by Jackson Browne and Glenn Frey and performed by the Eagles. The city had suffered a loss of commerce when U.S. Route 66 was supplanted by Interstate 40, but the popularity of the song led to renewed attention for Winslow and a commercial renaissance.

Winslow is served by the Winslow Unified School District.

The Little Springs Community School, a tribal elementary school affiliated with the Bureau of Indian Education (BIE), has a Winslow postal address but is actually in an unincorporated area 6 miles (9.7 km) southeast of Birdsprings.

All content from Kiddle encyclopedia articles (including the article images and facts) can be freely used under Attribution-ShareAlike license, unless stated otherwise. Cite this article:
Winslow, Arizona Facts for Kids. Kiddle Encyclopedia.