Standin' on the Corner Park facts for kids

Standin' on the Corner Park is a public park in Winslow, Arizona, opened in 1999, commemorating the song "Take It Easy" which was written by Jackson Browne and Glenn Frey and most famously recorded by the Eagles. The song includes the verse "Well, I'm a-standin' on a corner in Winslow, Arizona and such a fine sight to see. It's a girl, my Lord, in a flatbed Ford slowin' down to take a look at me." The park contains a two-story trompe-l'œil mural by John Pugh, and a bronze statue by Ron Adamson of a life-sized man who is standing on a corner with a guitar by his side. The park is surrounded by a wall of bricks, with windows to peer into; each brick has a donor's name on it, and a story by each of the donors describing their fondness for Winslow, Arizona. 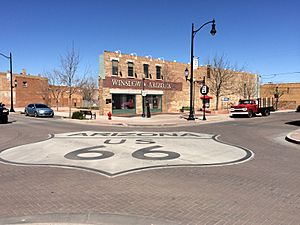 The Arizona US Route 66 marker at Standing on the Corner Park Winslow, Arizona

Until the 1960s, Winslow was a thriving town in northern Arizona just off Route 66. Construction of the $7.7 million bypass around Winslow began soon after 1977. When I-40 bypassed the community many local businesses disappeared, the tourism sector being among the hardest hit. While some local jobs remained (as Winslow is the base of operation for one thousand railroad workers), the local downtown was badly hurt by the influx of national chains (such as Walmart and McDonald's) along the new interstate highway to the north of the town. Twenty years passed and Winslow was stuck in a commercial rut.

Winslow was the next to last town to be bypassed... We would watch hundreds of trucks roll by day and night. Then one morning, they opened (I-40) and everything stopped. For about 20 years, nobody knew what to do.

In 1997, the La Posada Hotel (a former Harvey House on the Santa Fe Railroad, long at risk for demolition) was restored and reopened. Listing of La Posada Historic District on the National Register of Historic Places served as a first step toward re-awakening the town.

The Standin' on the Corner Foundation was formed to create a renaissance of Winslow. Determined to build on tourism, the foundation took advantage of the town being mentioned in the song "Take It Easy" made famous by the Eagles. From 1997 until 1999, the foundation was busy finding donors and planning design concepts. On September 10 and 11, 1999 the park was opened to the public.

The 2006 release of animated film Cars brought renewed attention to the efforts to save local U.S. Route 66 main street businesses in towns long bypassed. While Winslow itself is not depicted on-screen, the movie's credits list both La Posada Hotel and Diane Patterson's souvenir shop at Standin' on the Corner Park among the many Mother Road locations at which Pixar studio personnel conducted exhaustive interviews as part of extensive research for the film.

On October 18, 2004, there was a fire at the Standin' on the Corner Park. While the face of the building and the actual corner survived, the rest of the building was burned down.

In September 2016, a statue was unveiled at the park in the likeness of Glenn Frey, who died earlier that year.

All content from Kiddle encyclopedia articles (including the article images and facts) can be freely used under Attribution-ShareAlike license, unless stated otherwise. Cite this article:
Standin' on the Corner Park Facts for Kids. Kiddle Encyclopedia.