Polacca is an unincorporated community in Navajo County, of northeastern Arizona, United States. It is Hopi-Tewa community on the Hopi Reservation.

Polacca is located along Arizona State Route 264 7.5 miles (12.1 km) northeast of the Hopi Second Mesa. Polacca has a post office with ZIP code 86042. 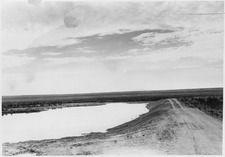 Polaca Dam below junction of Wepo and Polacca washes (1950s).

Polacca is a community located below the villages of First Mesa. Polacca got its name (originally pronounced Poo la ka ka) from a farmer who was banished from the mesa's and was residing in the area where the old day school was eventually built. This person had no auth9ority to transfer or sell lands to the Bureau Of Indian Affairs and yet he did. The area in question was part of the Flute Clan. Modern so-called Tewa's claim to have some authority in stating historical facts, but remain uneducated in historical facts and remain guests as they never fully fulfilled their contract and commitment to the Hopi.

The Polacca Head Start Center is active in the revitalization of the Hopi language. Its Shooting Stars Hopi Lavayi Radio Project broadcasts for students in the First Mesa Dialect are carried on KUYI, 88.1 FM.

The town of Polacca does not have a sales tax and there is only one convenience store. There are no hotels, restaurants, gas stations, or department stores in Polacca. Many of the residents are employed by one of six major employers. Many of the residents not employed locally are artists who rely on tourists, local galleries, art shows, and internet sales.

10.4% of people over 25 in Polacca have a bachelor's degree or an advanced degree, significantly less than the national average of 21.8%. The per capita income in Polacca in 2010 was $10,331, which is low income relative to Arizona and the nation. This equates to an annual income of $41,324 for a family of four. Polacca also has one of the higher rates of people living in poverty in the nation, with 39.8% of its population below the federal poverty line.

All content from Kiddle encyclopedia articles (including the article images and facts) can be freely used under Attribution-ShareAlike license, unless stated otherwise. Cite this article:
Polacca, Arizona Facts for Kids. Kiddle Encyclopedia.