Pinedale is an unincorporated community in Navajo County, Arizona, United States. The population was 487 at the 2010 census. The elevation is approximately 6,500 ft (2,000 m) and it is part of the Mogollon Rim mountain range.

Pinedale was first known as Mortensen, after Niels Mortensen who established a Mormon settlement there in 1879. It was also known as Percheron, for the breed of stallions which Mortensen had brought with him. By 1888, however, the settlement was called Pinedale. 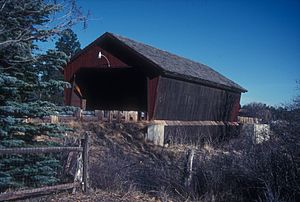 Sawmills, cattle, sheep and dry-farming have always been the main source of income and sustenance. The U.S. Forest Service also provides a presence. The Cady Lumber Company mill was located south of Pinedale in the 1920's and 1930's in what was called Standard. During the operation of the mill, the town grew to over 500 residents, with its own stores and a hospital.

All content from Kiddle encyclopedia articles (including the article images and facts) can be freely used under Attribution-ShareAlike license, unless stated otherwise. Cite this article:
Pinedale, Arizona Facts for Kids. Kiddle Encyclopedia.