Oraibi, also referred to as Old Oraibi, is a Hopi village in Navajo County, Arizona, United States, in the northeastern part of the state. Known as Orayvi by the native inhabitants, it is on Third Mesa on the Hopi Reservation near Kykotsmovi Village. There are no accurate census counts or estimates for the village population.

Oraibi was founded sometime before the year 1100 CE, making it one of the oldest continuously inhabited settlements within the United States. Archeologists speculate that a series of severe droughts in the late 13th century forced the Hopi to abandon several smaller villages in the region and consolidate within a few population centers. As Oraibi was one of these surviving settlements its population grew considerably, and became populous and the most influential of the Hopi settlements. By 1890 the village was estimated to have a population of 905, almost half of the 1,824 estimated to be living in all of the Hopi settlements at the time.

Oraibi remained unknown to European explorers until about 1540 when Spanish explorer Don Pedro de Tovar (who was part of the Coronado expedition) encountered the Hopi while searching for the legendary Seven Cities of Gold. Contact with the Europeans remained scant until 1629 when the San Francisco mission was established in the village. In 1680 the Pueblo Revolt resulted in decreased Spanish influence in the area and the cessation of the mission. Subsequent attempts to reestablish the missions in Hopi villages were met with repeated failures. The former mission is still visible today as a ruin.

Hopi interaction with outsiders slowly increased during the 1850–1860 time period through missionaries, traders and surveyors for the US government. Contact remained sporadic and informal until 1870 when an Indian agent was appointed to the Hopi, followed by the establishment of the Hopi Indian Agency in Keams Canyon in 1874.

Interaction with the US government increased with the establishment of the Hopi reservation in 1882. This led to a number of changes for the Hopi way of life. Missionary efforts intensified and Hopi children were kidnapped from their homes and forced to attend school, exposing them to new cultural influences.

In 1890 a number of residents more receptive to the cultural influences moved closer to the trading post to establish Kykotsmovi Village, sometimes called New Oraibi. The continuing tension caused by the ideological schism between the "friendlies" ("New Hopi" to the traditional Hopi), those who were open to these cultural influences, and the "hostiles" (or "Traditionalists" led by Yukiuma) who opposed them (those who desired to preserve Hopi ways) led to an event called the Oraibi Split in 1906. Tribal leaders on differing sides of the schism engaged in a bloodless competition to determine the outcome, which resulted in the expulsion of the hostiles (Traditionalists), who left to found the village of Hotevilla. Subsequent efforts by the displaced residents to reintegrate resulted in an additional split, with the second group founding Bacavi.

With the loss of much of its population Oraibi lost its place as the center of Hopi culture. Although the Hopi tribal constitution, maneuvered into being by the Coal Mining Interests in 1939, provides each village with a seat on the tribal council, Hotevilla, where most of the traditional Hopi settled, has declined to elect a representative and maintains independence from the tribal council. Kykotsmovi Village is now the seat of the Hopi tribal government.

In spite of the "friendly" ("New Hopi") outcome of the Oraibi Split, Old Oraibi has since maintained a more traditional Hopi way of life and has resisted the adoption of the more modern culture visible in Kykotsmovi. While visitors to the pueblo are welcomed (a short road connects to Arizona State Route 264), the residents tend to be very private and do not allow photographs to be taken in the town, and thus there are no known reliable photographs of the settlement as it exists in the modern day. 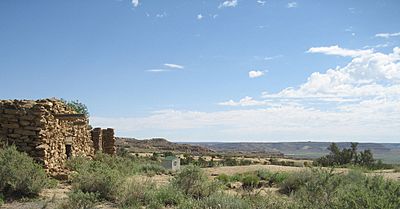 Old Oraibi is listed on the National Register of Historic Places and was declared a National Historic Landmark in 1964.

All content from Kiddle encyclopedia articles (including the article images and facts) can be freely used under Attribution-ShareAlike license, unless stated otherwise. Cite this article:
Oraibi, Arizona Facts for Kids. Kiddle Encyclopedia.