Gila County is a county in the central part of the U.S. state of Arizona. As of the 2010 census its population was 53,597. The county seat is Globe.

The county was formed from parts of Maricopa County and Pinal County on February 8, 1881. The boundary was then extended eastward to the San Carlos River by public petition in 1889. The original county seat was in the mining community of Globe City, now Globe, Arizona.

Popular theory says that the word Gila was derived from a Spanish contraction of Hah-quah-sa-eel, a Yuma word meaning "running water which is salty".

In the 1880s, a long range war broke out in Gila County that became the most costly feud in American history, resulting in an almost complete annihilation of the families involved. The Pleasant Valley War (also sometimes called the Tonto Basin Feud or Tonto Basin War) matched the cattle-herding Grahams against the sheep-herding Tewksburys. Once partisan feelings became tense and hostilities began, Frederick Russell Burnham, who later became a celebrated scout and the inspiration for the boy scouts, was drawn into the conflict on the losing side. Burnham shot many men in the feud, and was himself nearly killed by a bounty hunter. Tom Horn, a famous assassin, was also known to have taken part as a killer for hire, but it is unknown as to which side employed him, and both sides suffered several murders to which no suspect was ever identified. In the 1960s, it was home of Gerald Gault, who was the subject of the 1967 U.S. Supreme Court ruling, in re Gault, that stated juveniles have the same rights as adults when arrested to be notified of the charges against them, the rights to attorneys, for family members to be notified of their arrests and to confront their accusers and to not be punished harsher than adults who are convicted of the same crime, especially if an adult's penalty for the crime would be less than a juvenile convict's. 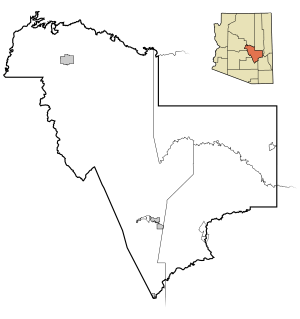 Map of the incorporated and major unincorporated areas in Gila County. Also shown are borders for Indian reservations in the County.

The population ranking of the following table is based on the 2010 census of Gila County.

All content from Kiddle encyclopedia articles (including the article images and facts) can be freely used under Attribution-ShareAlike license, unless stated otherwise. Cite this article:
Gila County, Arizona Facts for Kids. Kiddle Encyclopedia.