Payson is a town in northern Gila County, Arizona, United States. Due to Payson's location being very near to the geographic center of Arizona, it has been called "The Heart of Arizona". The town is surrounded by the Tonto National Forest and has many outdoor activities year round. As of the 2020 census, the population of Payson was 15,813.

Payson considers its founding year as 1882, at which time it was known as "Green Valley". On March 3, 1884, a post office was established with the help of Illinois Representative Lewis E. Payson. The first postmaster was Frank C. Hise. In honor of Representative Payson's help, the town's name was changed to "Payson".

Payson had its first rodeo in 1884. Payson considers its rodeo the "world's oldest continuous", as it has been held every year since.

In 1918 author Zane Grey made his first trip to the area surrounding Payson. He would come back with regularity through 1929, and would purchase two plots of land near Tonto Creek, including 120 acres (49 ha) from Sampson Elam Boles under Myrtle Point. Grey wrote numerous books about the area and also filmed some movies, such as To the Last Man, in the Payson area in the 1920s.

During Prohibition the manufacture, sale, and distribution of liquor was plentiful. The transactions took place on historic Bootleg Alley.

During the 1930s an effort began to try to get Payson a better road to connect it to the outside world. At that time Payson was very isolated, with a trip from Phoenix to Payson taking eight to twelve hours. Throughout the 1950s work on a paved road from Phoenix to Payson progressed, and the paving was completed in 1958. A few years ago this highway, State Route 87 (also known as the "Beeline Highway"), was expanded to four lanes. 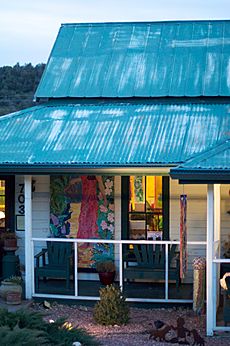 Down the Street Art Gallery on Main Street in Payson

"Zane Grey Country" is a term for the area around Payson. This term was most often used in the 1970s and 1980s, and appeared in the header of the local newspaper, the Payson Roundup. In recent times it has fallen somewhat out of favor, as the term "Rim Country" has become more popular among locals.

Owing to its elevation of almost 5,000 feet (1,500 m), Payson has what is classified as a Mediterranean climate (Köppen Csa), though atypical for this climate with its early-summer drought and late-summer rainfall. Whilst average temperatures do reach the high 80s to mid 90s in summer, the town’s altitude usually keeps it protected from the 100 °F (37.8 °C)+ temperatures usually found at Arizona’s lower elevations. Monsoon storms often develop in the later afternoon, bring heavy rainfall to the area and also lower the temperature a bit. Summer nights cool down into the 50s.

Winter is also mild, with cold nights. January's average nighttime low is 25.3 °F or −3.7 °C with some nights in the teens, but by mid-afternoon, the temperature has usually risen into the 50s. There are only a few days of real winter, with 23.3 inches (0.59 m) of annual snowfall, but very little snow cover. The weather in Payson is as varied as the landscape, and a snowstorm is often followed by weather so warm that any accumulation melts away within a day or two. In spring the desert blooms with a fiery array of Indian paintbrush, primrose, and the golds and fuchsias of cactus blossoms and other brightly-colored wildflowers. In this mild climate, neither summer nor winter are “indoor” seasons.

On Monday, November 5, 2001, between about 8pm and 10:30pm, Payson was treated to a rare display of the Northern Lights. It is extremely rare and only happens during solar flares because Payson is so far south. The lights appeared in a red color. 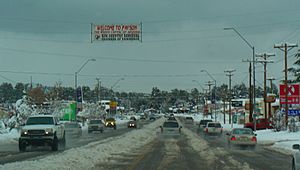 Looking North on Highway 87 in Payson during snowfall.

Ninety-seven percent of the land around Payson is under the jurisdiction of the United States Forest Service (Payson is surrounded by the Tonto National Forest) or by tribal governments. Consequently, much of the land is available for hiking, horseback riding, fishing and hunting activities. Tonto Natural Bridge, the largest known travertine natural bridge in the world, is located just northwest of Payson in Tonto Natural Bridge State Park, a unit of the Arizona State Park system. The area incorporates three golf courses, two of which belong to private country clubs. Mazatzal Casino, a tribal casino, is operated by the Tonto Apache Indian Reservation near the south end of the city. The casino also provides Thanksgiving and Christmas buffets. 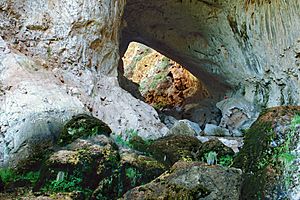 The Payson area is a popular destination for rockhounds. In various areas surrounding the community quartz crystals can be found, some rivaling Herkimer diamonds in quality, as well as geodes, agate and onyx. Fossils are commonly found in the Paleozoic strata that is exposed along the Mogollon Rim to the north and west of Payson along State Route 87 and State Route 260.

Payson is known for its rodeo which is the oldest continuous rodeo in the world.

Payson has two parks, Green Valley Park and Rumsey Park. Payson also has two lakes which are part of the Urban Fish Program. A community swimming pool is located near Rumsey Park and the town hosts free outdoor concerts in the summer. Other activities include intramural sports like baseball and football. Payson also has a small skatepark.

Payson is the site of the annual Arizona State Championship Old Time Fiddlers Contest, held in September. The fiddle contest features both local and nationally known players and awards cash prizes. Payson is also home of two rodeos. In May the Multi-Purpose Event Center across from the Tonto Apache Indian Reservation hosts the Gary Hardt Memorial Rodeo. In August, the historic August Doin's Rodeo (1884) takes place making Payson, Arizona the "Home of the World's Oldest Continuous Rodeo." Prescott, Arizona is known as hosting the "World's Oldest Rodeo" (1888) but took a hiatus during World War II.

All content from Kiddle encyclopedia articles (including the article images and facts) can be freely used under Attribution-ShareAlike license, unless stated otherwise. Cite this article:
Payson, Arizona Facts for Kids. Kiddle Encyclopedia.