Mesa del Caballo is a census-designated place (CDP) in Gila County, Arizona, United States. The population was 765 at the 2010 census. 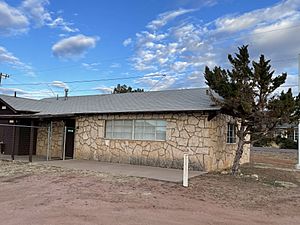 The CDP is located in northern Gila County atop Houston Mesa, a low ridge north of Payson. The center of Payson is 5 miles (8 km) south via Houston Mesa Road and Arizona State Route 87. According to the United States Census Bureau, the CDP has a total area of 0.32 square miles (0.82 km2), all of it land.

All content from Kiddle encyclopedia articles (including the article images and facts) can be freely used under Attribution-ShareAlike license, unless stated otherwise. Cite this article:
Mesa del Caballo, Arizona Facts for Kids. Kiddle Encyclopedia.