Prescott (/ˈprɛskət/ PRES-kət; Yavapai: ʼWi:kwatha Ksikʼita) is a city in Yavapai County, Arizona, United States. According to the 2010 Census, the population of the city is 39,843. The city is the county seat of Yavapai County. In 1864 Prescott was designated as the capital of the Arizona Territory, replacing the temporary capital at Fort Whipple. The Territorial Capital was moved to Tucson in 1867. Prescott again became the Territorial Capital in 1877, until Phoenix became the capital in 1889.

The towns of Prescott Valley, 7 miles (11 km) east; Chino Valley, 16 miles (26 km) north; Dewey-Humboldt, 13 miles (21 km) east, and Prescott, together comprise what is locally known as the "Quad-City" area. This also sometimes refers to central Yavapai County in general, which would include the towns of: Mayer, Paulden, Wilhoit, and Williamson Valley. Combined with these smaller communities the area had a population of 103,260 as of 2007[update]. Prescott is the center of the Prescott Metropolitan Area, defined by the U.S. Census Bureau as all of Yavapai County.

The Yavapai-Prescott Indian Tribe reservation is located adjacent to and partially within the borders of Prescott. 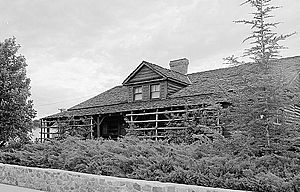 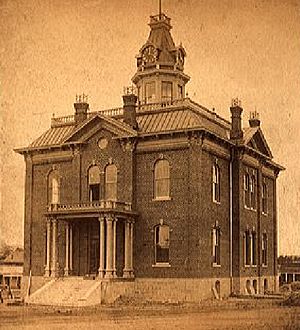 Arizona Territorial Governor John Noble Goodwin selected the original site of Prescott following his first tour of the new territory. Goodwin replaced Governor John A. Gurley, appointed by Abraham Lincoln, but died before taking office. Downtown streets in Prescott are named in honor of each of them. Goodwin selected a site 20 miles (32 km) south of the temporary capital on the east side of Granite Creek near a number of mining camps. The territorial capital was later moved to the new site along with Fort Whipple, with the new town named in honor of historian William H. Prescott during a public meeting on May 30, 1864. Robert W. Groom surveyed the new community, and an initial auction sold 73 lots on June 4, 1864. By July 4, 1864, a total of 232 lots had been sold within the new community. Prescott was officially incorporated in 1880.

The Sharlot Hall Museum houses much of Prescott's territorial history, and the Smoki and Phippen museums also maintain local collections. Whiskey Row in downtown Prescott boasts many historic buildings, including The Palace, Arizona's oldest restaurant and bar is still the oldest frontier saloon in Arizona. Many other buildings that have been converted to boutiques, art galleries, bookstores, and restaurants. Prescott is home to the Arizona Pioneers' Home and Hospital for Disabled Miners. The Home opened during territorial days, February 1, 1911. The city was named after author William H. Prescott, whose writings were popular during the Civil War.

Prescott also has a place in western folklore with the fact that Virgil Earp, Wyatt Earp's older brother, lived in Prescott in 1879 and told him of the boom town in Tombstone, Arizona. It is also rumored that Doc Holliday spent some time in Prescott just before heading to Tombstone.

After several major fires in the early part of the century, downtown Prescott was rebuilt with brick. The central courthouse plaza, a lawn under huge old elm trees, is a gathering and meeting place. Cultural events and performances take place on many nights in the summer on the plaza.

Barry Goldwater, the 1964 Republican nominee for president, launched his presidential campaign from the steps of Prescott's Yavapai County Courthouse. 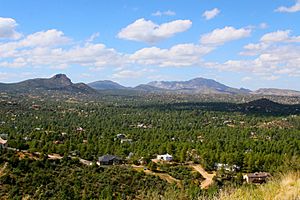 Prescott is 55 mi (89 km) west-northwest of the State of Arizona's geographic center.

Prescott is considered part of North Central Arizona. It is just south of the Granite Dells. The Granite Dells area, or often called ‘The Dells’, is notorious for its large boulder outcroppings of granite that have eroded into a spectacular appearance of bumpy rock features. Within 'The Dells' are Watson and Willow Lakes, which are two small, man-made reservoirs. Here a number of hiking trails connect to the Peavine Trail. The Peavine National Recreation Trail follows what was the former rail bed of the Santa Fe. This railroad traveled from Prescott to Phoenix through the Granite Dells. The “Peavine” got its name from the winding portion of this railroad that twists and curves, resembling the vine on which peas grow. The Peavine trail connects to the Iron King Trail, which was the route of the old Prescott Railroad through the Granite Dells. Natural lakes include Lynx, Granite Basin and Goldwater, all surrounding different areas of this rustic community. Goldwater Lake, by Goldwater Park, is located four miles from downtown Prescott and is some 15 acres of water surface, and is a popular destination for park recreation and picnic facilities. Lynx Lake is another lake close to Prescott in tall Ponderosa pines, and gets some 125,000 visitors every year. This 55-acre lake offers visitors recreational activities, boating, camping, fishing, hiking, mountain biking, picnicking and even has a small, seasonal restaurant with a great view near the lake. Finally, there's the smallest of the natural lakes with some 5 acres of surface water at Granite Basin Lake. None of these lakes permit swimming, however all are popular recreational destinations near Prescott.

Granite Creek flows generally north from the Bradshaw Mountains through the city, the Granite Dells, and the Little Chino Valley to the Verde River.

Prescott is located in the Bradshaw Mountains of central Arizona, at an elevation of 5,400 feet (1,600 m). Average annual precipitation for 1981–2010 is 17.75 inches (451 mm), with spring and early summer the driest times of the year. Snowfall is typically light and snow cover usually melts away quickly; the 1981–2011 average seasonal total is 12.8 inches (33 cm).The largest portion of precipitation falls during the July–September monsoon season. Average daytime temperatures remain above 50 °F (10 °C) the entire year, but diurnal temperature variation is large throughout the year, averaging nearly 30 °F (17 °C) annually. On average, temperatures reach 90 °F (32 °C) on 36 days annually, though 100 °F (38 °C)+ readings are uncommon and do not occur every year, much unlike the Sonoran Desert to the south and Mojave Desert to the west. The average season for freezing temperatures is October 21 through May 1.

There was a severe drought from 1999 to 2009, seen from the lack of snowpack in the Bradshaw Mountains. Local creeks do not contain water except immediately after the rare rains. Nevertheless, at the start of 2007 lakes were reported as full. The winter of 2005–06 had less than 3 inches (7.6 cm) of snow, compared to an average snowfall of 22 inches (56 cm).

There were 15,098 households out of which 18.1% had children under the age of 18 living with them, 48.7% were married couples living together, 7.9% had a female householder with no husband present, and 40.6% were non-families. 32.1% of all households were made up of individuals and 15.2% had someone living alone who was 65 years of age or older. The average household size was 2.11 and the average family size was 2.62. 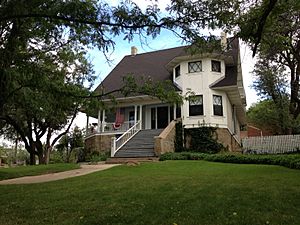 Brinkmeyer House, listed on the National Register of Historic Places 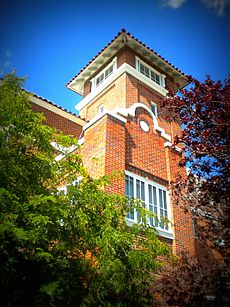 Prescott has many Victorian style homes. Prescott has 809 buildings on the National Register of Historic Places.

Prescott is home to the downtown historical area known as Whiskey Row. Originally built in 1877, the The Palace Restaurant and Saloon was rebuilt after the fire, and is now the oldest continuous business in the entire state. Merchant Sam Hill's large hardware store was located near Whiskey Row.

Prescott is home to The Arizona Pioneers' Home, a continuing care retirement home, operated and funded by the State of Arizona, originally intended for impoverished Arizona founders from Territorial days. Initially the home was built to house 40 men, but in 1916 an addition of a women’s wing was completed to provide for 20 women. Later, in 1929, the home again expanded to include Arizona’s Hospital for Disabled Miners (current total capacity is 150 beds). Scenes from the 2008 movie Jolene were filmed in the Pioneer's Home in 2006. The Home has had many colorful residents, including a John Miller, who had claimed to be Billy the Kid, and who was exhumed from the Pioneer's Home Cemetery in 2005 in an attempt to identify DNA evidence. Another resident was "Big Nose Kate" Elder, who would also be laid to rest in the Pioneer's Home Cemetery, though not without controversy.

While Prescott is known for its western and cowboy feel, it is also the home of Prescott College, a small liberal arts college located just west of the downtown area that emphasizes environmental and social justice. In recent years Prescott College has fostered The Catalyst Infoshop (an Anarchist Free Space), Karma Farms (a community garden program), a local farmers market, as well as many other establishments. It is a non-profit organization which has an undergraduate body of roughly 800 students, and an average student to faculty ratio of 7:1 in on-campus classrooms. There are four general programs at Prescott College: the On-campus Undergraduate Program (RDP), Limited-Residency Undergraduate Degree Program (ADP), the Limited-Residency Master of Arts Program (MAP), and a Limited-Residency PhD program in Sustainability Education. Those enrolled in the Limited-Residency programs work with various mentors and Prescott College faculty, usually in their home communities. On-campus students live in Prescott and attend classes at the college itself.

In recent years, Prescott has become a recovery destination for uncounted thousands. At any given time, some 1,200 people are actively in addiction recovery in Prescott. Prescott is among the nation's top locations for recovery help and a significant industry has grown up around the effort to help folks make an addiction-free life for themselves. Prescott is home to many recovery and rehab centers, a newly minted detoxification clinic and an amorphous community of dozens of halfway houses and sober living homes. There are more than 150 group homes providing housing for those in recovery programs. Current studies show Prescott as having 7.3 counselors per 10,000 people earning the unofficial title of Arizona's Recovery City.

The cultures of Prescott's recovery community and the community of Prescott College and the intersections there-of have fostered a thriving punk scene which hosts shows weekly at individual's homes, Gurley Street Coffee, and many other restaurants and bars throughout town. Prescott has been home to several nationally known punk bands, including Bueno, Life in Pictures, and Hour of the Wolf. Local bands often play shows alongside touring bands, who include Prescott in their tours.

A panorama of the Courthouse square in downtown Prescott.

Prescott was designated "Arizona's Christmas City" by Arizona Governor Rose Mofford in 1989. Other notable designations include:

2000. Downtown Historic Preservation District (which includes "Whiskey Row") —one of 12 such National Register Historic Districts within the City.

2006. One of a “Dozen Distinctive Destinations” by the National Trust for Historic Preservation.

2008. Yavapai Courthouse Plaza recognized as one of the first ten “Great Public Places” in America by the American Planning Association. The plaza enjoys the select company of such iconic places as New York City’s Central Park and Santa Monica Beach in California. The historic courthouse stands in an oasis of green grass in a gothic cathedral of 170+ trees including 127 American elms. More than 130 activities occur annually including arts and crafts shows, concerts, dancing, outdoor movies, and other special events. People are always seen on the plaza. Walking (3 laps = 1 mile) around the plaza is quite popular with the locals.

2012. Number 1 True Western Town of the Year for 2011 by True West Magazine and One of the 61 Best Old House Neighborhoods in the U.S and Canada by This Old House Magazine. 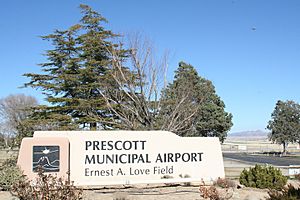 View of airport from Hwy 89

As of 2015[update], Prescott has three sister cities:

All content from Kiddle encyclopedia articles (including the article images and facts) can be freely used under Attribution-ShareAlike license, unless stated otherwise. Cite this article:
Prescott, Arizona Facts for Kids. Kiddle Encyclopedia.