The Bradshaw Mountains (Yavapai: Wi:kañacha, "rough, black range of rocks") are a mountain range in central Arizona, United States, named for brothers Isaac and William Bradshaw after their death, having been formerly known in English as the Silver Mountain Range.

The first known settlements in the Bradshaws were a group of Yavapai people, called the Kwevkapaya who built forts and mined copper from around AD 1100 to 1600. Apaches occupied the area around 1800 as a means of keeping White settlers out. But by 1863, a party led by William Bradshaw was in the area, followed by the Walker party. In 1864, a group of five white settlers was attacked by Apaches at what is now called Battle Flat. One of the settlers went for help, but upon his return found the Apaches had left. The Walker party found gold, and within a few years, the Bradshaws were filling up with settlers mining for gold, silver, and copper. In the early part of the 20th century, most of the towns that had sprung up were little more than ghost towns. 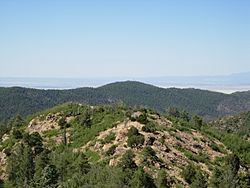 Spruce Mountain seen behind Mount Davis, from the peak of Mount Union

Located approximately 5 miles (8 km) south of Prescott, Arizona, between the Agua Fria River on the east, and the Hassayampa River on the west, the range is 40 miles (64 km) long, and almost 25 miles (40 km) wide.

The biotic community of the Bradshaws ranges from interior chaparral and montane conifer forest, to plains and desert grassland, and Sonoran desert scrub. Many species of trees are found in the Bradshaws, including Piñon, Alligator Juniper, Ponderosa pine, Blue Spruce, Quaking Aspen, White fir, and Douglas fir. As well, much wildlife is present, including javelina, mountain lion, bobcat, black bear, mule deer, porcupine, fox, skunk, rock squirrel, wild turkey, many species of reptiles and amphibians, and many species of birds. 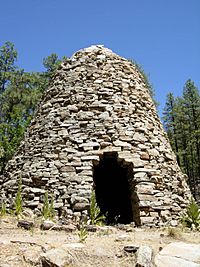 Gold was first discovered in the Bradshaws in the 1863, over $2,000,000 worth being taken from just the Crown King Mine. Copper and silver were also mined in the early part of the 20th century.

Ghost towns and other settlements

There are over 40 ghost towns in the Bradshaw Mountains, including Crown King, Bumble Bee, Goodwin, Bradshaw City, Alexandra and Cleator.

All content from Kiddle encyclopedia articles (including the article images and facts) can be freely used under Attribution-ShareAlike license, unless stated otherwise. Cite this article:
Bradshaw Mountains Facts for Kids. Kiddle Encyclopedia.