Crown King is an unincorporated community in Yavapai County, Arizona, United States, located at an elevation of 5,771 feet (1,759 m). Crown King has a ZIP Code of 86343; in 2000, the population of the 86343 ZCTA was 133. The site of a former gold mining town, Crown King is 28 miles west of Interstate 17 on Senator Highway, high in the Bradshaw Mountains. The community is named after the Crowned King mine, but the name was shortened to Crown King in 1888. Horsethief Basin Lake resides 6.5 miles southeast of Crown King on Crown King Rd/Forest 259 Rd.

According to the Köppen climate classification system, Crown King has a Mediterranean climate, classified as Csb on climate maps. It is atypical of this type because its dry season only covers the first half of summer and is followed by heavy monsoonal thunderstorms in July and August.

Snowfall can be heavy, with 116.2 inches (2.95 m) falling in January 1949, although in general snow cover is minimal due to relatively warm days in winter. 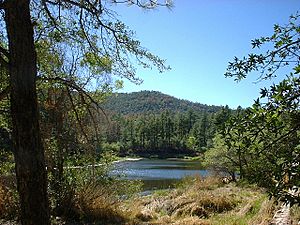 All content from Kiddle encyclopedia articles (including the article images and facts) can be freely used under Attribution-ShareAlike license, unless stated otherwise. Cite this article:
Crown King, Arizona Facts for Kids. Kiddle Encyclopedia.