Cleator is a ghost town in Yavapai County, Arizona, United States. It lies along the road that has replaced Murphy's Impossible Railroad between Cordes and Crown King.

Turkey Creek was renamed Cleator in 1925 after James P. Cleator took possession of the town from Levrett P. Nellis. He then named the post office after himself. The post office closed July 15, 1954. 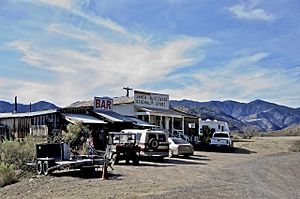 Cleator's population fell in the 1920s as mining in the area declined and the town was put up for sale by James Cleator in April 1949. It then had about 60 residents. James P. Cleator's son Thomas bought the town and lived there until his death in 1996. He kept the small bar open most of the years he lived there. After his death everything was inherited by his sister Eleanor and her son. The bar is still open and a favorite stop along the dusty road for recreational ATV drivers and weekend tourists.

All content from Kiddle encyclopedia articles (including the article images and facts) can be freely used under Attribution-ShareAlike license, unless stated otherwise. Cite this article:
Cleator, Arizona Facts for Kids. Kiddle Encyclopedia.