Kids Encyclopedia Facts
Not to be confused with Prescott, AZ. 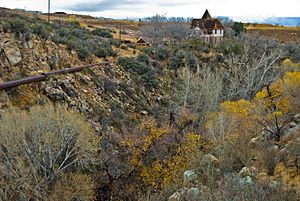 The 1895 Massicks house on Lynx Creek in Fain Park

Prescott Valley is a town with a current population (October 2016) of about 45,500 residents located in Yavapai County, Arizona, United States, and a suburb of Prescott (although Prescott Valley is larger). Prescott Valley was the seventh fastest-growing place among all cities and towns in Arizona between 1990 and 2000. According to the 2010 Census, the population of the town is 38,822.

One of PV’s landmarks, Glassford Hill (elevation 6,177 feet (1,883 m)) was once an active volcano between 10 and 14 million years ago. Colonel William A. Glassford traveled the area in the 1880s and helped build a system of 27 heliograph stations to monitor the movements of Apache Indians, U.S. military troops and civilians. Glassford Hill was a part of that early communications system. Today, it stands as an dormant volcano.

Prescott Valley’s Fitzmaurice Ruins contain artifacts from the early Mountain Patayan people who inhabited the area some 1,400 years ago.

Prescott Valley, formerly known as Lonesome Valley, was settled by ranchers in the 1880s, raising beef to supply the miners and new settlers. The Fain family, pioneer ranchers, still ranch in the valley.

Thomas Gibson Barlow-Massicks arrived in the area in the early 1890s and built the historic "castle" that still stands in Fain Park. Massicks had a hydraulic gold mining operation in Lynx Creek Canyon and built the company mining camp of Massicks, Arizona just east of his Victorian home, the Castle. The fireplace with chimney just inside the Castle's fence is all that remains of the Massicks store. Massicks accidentally shot himself and died in April 1899 at the age of 37. In the 1930s, there was a gold dredging operation, the Doodle Bug Diggings, farther east in Lynx Creek Canyon.

Prescott Valley is located within 10 minutes of the Prescott National Forest, with lakes, fishing, hiking and camping. The Entertainment District is located downtown and offers a variety of restaurants, a 6,000-seat events center, a multi-screen movie theater, and retail shops. Fain Park preserves remnants of early 20th century gold mining along Lynx Creek.

The Northern Arizona Suns, a minor league basketball team in the NBA Development League, plays out of the Prescott Valley Event Center. In April 2016, the National Basketball Association's Phoenix Suns purchased their affiliated NBA D-League team, the Bakersfield Jam, and relocated the team to Prescott Valley beginning with the 2016–17 season.

All content from Kiddle encyclopedia articles (including the article images and facts) can be freely used under Attribution-ShareAlike license, unless stated otherwise. Cite this article:
Prescott Valley, Arizona Facts for Kids. Kiddle Encyclopedia.