Globe (Western Apache: Bésh Baa Gowąh "Place of Metal") is a city in Gila County, Arizona, United States. As of the 2010 census, the population of the city was 7,532. The city is the county seat of Gila County. Globe was founded c. 1875 as a mining camp. Mining, tourism, government and retirees are most important in the present-day Globe economy.

The Globe Downtown Historic District was added to the National Register of Historic Places in 1987.

According to the United States Census Bureau, the city of Globe has a total area of 18.2 square miles (47.1 km2), of which 0.01 square miles (0.03 km2), or 0.07%, is water. The town of Miami, Arizona, is 6 miles (10 km) west of Globe's downtown. Globe, Miami, and the unincorporated areas nearby (including Inspiration, Claypool and Central Heights-Midland City) are commonly called "Globe-Miami".

Globe is served by the Arizona Eastern Railway. In December 2008, weekend excursion service under the name Copper Spike began operating from Globe to the Apache Gold Hotel Casino near San Carlos. Trains operated four daily round-trips on Thursdays through Sundays (autumn through spring) until 2011, when the Copper Spike Excursions were discontinued.

Globe has a semi-arid climate, characterized by hot summers and moderate to warm winters. Globe's arid climate is somewhat tempered by its elevation, however, leading to slightly cooler temperatures and slightly more precipitation than Phoenix or Yuma. 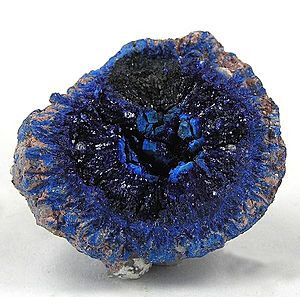 Unusual azurite specimen from the Blue Ball mine near Globe. About 1.5 inches (3.5 cm) wide.

Besh-Ba-Gowah, about one mile south of Globe, was occupied by Salado populations between AD 1225 and AD 1400. 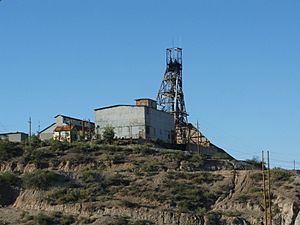 The Old Dominion mine was the principal copper producer in the Globe District. In retirement, the old mine workings serve as the water supply for Globe-Miami and the district mines. Photo courtesy Jerry Willis. 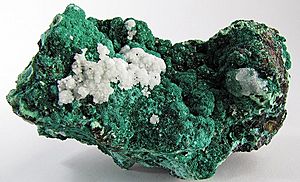 Specimen of malachite from the Old Dominion mine

The plans for an incorporated Globe were established in July 1876, with retail stores, banks, and Globe's first newspaper printing its first issue on May 2, 1878. By February 1881, Globe was the Gila County seat. Coming with Globe's new importance as the county seat came a stagecoach line linking it to Silver City, New Mexico.

Due to Globe's relative isolation from the rest of Arizona and its proximity to the San Carlos Apache reservation, Globe remained a frontier town. Globe's history is laced with many historic events such as murders, stagecoach robberies, outlaws, lynchings, and Apache raids. Natiotish, a San Carlos Apache, left the reservation with a group of about 50 men and continued to attack ranchers and miners.

In 1884 the surviving Clanton brothers Ike and Phineas arrived in Apache County after the infamous gunfight at the OK Corral in Tombstone. Ike was eventually killed by a local deputy sheriff, and Phineas, after serving prison time for a stage robbery, moved to Globe, where he died of pneumonia and was buried in 1906.

Globe is also known for having links to Geronimo and the Apache Kid. On October 23, 1889, the Apache Kid's trial was held in the Globe Courthouse. After he was convicted, it was the responsibility of Sheriff Glenn Reynolds to transport him to the Arizona Territorial Prison in Yuma. Sheriff Reynolds, his deputy, and their prisoners set out in an armored stagecoach holding the Apache Kid inside. At an incline in the road, known as the Kelvin Grade, near present-day Kearny, Sheriff Reynolds let some of the prisoners out of the stagecoach seeing as they were on an uphill climb and he wanted to ease the burden on the horses. The prisoners were able to overcome and murder Sheriff Reynolds as well as one other man. A third was left for dead. In response, the United States Army launched a campaign to track down the renegades. 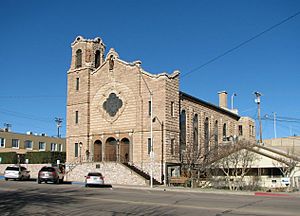 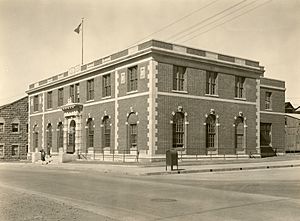 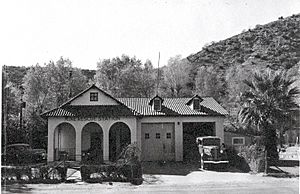 (Buildings that burned or no longer stand are listed in italics)

In 1875, prospectors found silver in the San Carlos Apache Reservation, including an unusual globe-shaped silver nugget. In just four years, the silver began to give out, but by then copper deposits were discovered. In the 1900s, the Old Dominion Copper Company in Globe ranked as one of the world's richest. The Old Dominion closed in 1931, and mining operations moved to nearby Miami.

Globe's economy remains heavily dependent on the service industry, and the mining industry, and as of 2008[update] the city was home to one of the few operating copper smelters in the United States. 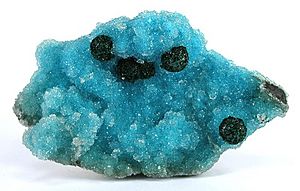 Malachite crystals in a matrix of quartz and chrysocolla. Old specimen from the Globe Hills.

All content from Kiddle encyclopedia articles (including the article images and facts) can be freely used under Attribution-ShareAlike license, unless stated otherwise. Cite this article:
Globe, Arizona Facts for Kids. Kiddle Encyclopedia.