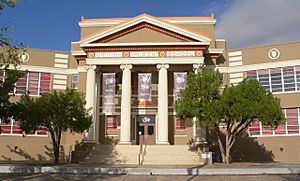 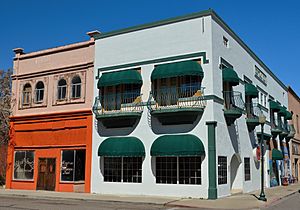 According to the United States Census Bureau, the town has a total area of .9 square miles (2.3 km2), all of it land.

Miami is adjacent to Globe, and near the San Carlos Apache Indian Reservation. Miami, Globe, and the unincorporated areas nearby (including Inspiration, Claypool and Central Heights-Midland City) are commonly called Globe-Miami. The town is located on the northeastern slope of the Pinal Mountains, and is surrounded (except to the east) by the Tonto National Forest. It is located on U.S. Routes 60 and 70, and is served by the Arizona Eastern Railway.

There were 754 households, out of which 31.6% had children under the age of 18 living with them, 42.7% were married couples living together, 16.8% had a female householder with no husband present, and 34.5% were non-families. 31.0% of all households were made up of individuals, and 15.8% had someone living alone who was 65 years of age or older. The average household size was 2.57 and the average family size was 3.21.

Copper mining accounts for the largest number of jobs in Miami. According to the 2002 annual report of the Arizona State Mine Inspector, Freeport-McMoRan employed nearly 600 at its Miami operations, including 330 at the smelter and 187 at the mine.

According to the Köppen Climate Classification system, Miami has a hot-summer Mediterranean climate, abbreviated "Csa" on climate maps.

The Town of Miami operates the Cobre Valley Community Transit, which provides local bus service in Miami and Globe.

All content from Kiddle encyclopedia articles (including the article images and facts) can be freely used under Attribution-ShareAlike license, unless stated otherwise. Cite this article:
Miami, Arizona Facts for Kids. Kiddle Encyclopedia.