Superior (Western Apache: Yooʼ Łigai) is a town in Pinal County, Arizona. According to the 2010 census, the population of the town is 2,837. Superior was founded as a mining town for the Silver Queen and the later Magma mines; silver was mined at first, and then transitioned to copper. Currently, exploitation of the huge Resolution Copper deposit is being explored.

Superior is located approximately 70 miles (110 km) east of Phoenix and the same distance north of Tucson. According to the United States Census Bureau, the town has a total area of 1.9 sq mi (5.0 km2), all land.

The Boyce Thompson Arboretum State Park is a 323-acre (1.31 km2) botanical collection that includes a wide range of habitats and a 1.5-mile (2.4 km) walking trail. Founded in 1925, the arboretum is the largest and oldest botanical garden in Arizona. 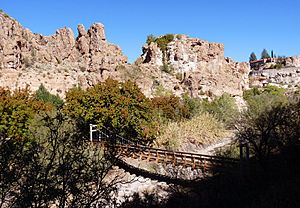 All content from Kiddle encyclopedia articles (including the article images and facts) can be freely used under Attribution-ShareAlike license, unless stated otherwise. Cite this article:
Superior, Arizona Facts for Kids. Kiddle Encyclopedia.