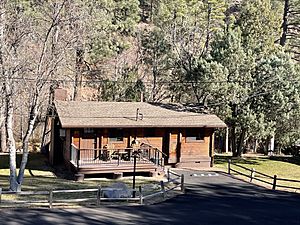 Kohls Ranch is a census-designated place (CDP) in Gila County, Arizona, United States. The population was 46 at the 2010 census.

The CDP is located in northern Gila County at the southern foot of the Mogollon Rim, in the valley of the upper reaches of Tonto Creek. Arizona State Route 260 forms the northern edge of the CDP, running west 16 miles (26 km) to Payson and east 73 miles (117 km) to Show Low. According to the United States Census Bureau, the Kohls Ranch CDP has a total area of 1.17 square miles (3.03 km2), all of it land.

All content from Kiddle encyclopedia articles (including the article images and facts) can be freely used under Attribution-ShareAlike license, unless stated otherwise. Cite this article:
Kohls Ranch, Arizona Facts for Kids. Kiddle Encyclopedia.