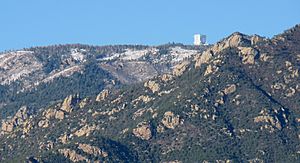 The Large Binocular Telescope on the summit ridge of the Pinaleno Mountains, Graham County.

Graham County is a county located in the southeastern part of the U.S. state of Arizona. As of the 2010 census, the population was 37,220, making it the third-least populous county in Arizona. The county seat is Safford.

The county is home to several organizations including Eastern Arizona College and the Mount Graham International Observatory, which includes one of the world's largest and most powerful telescopes. Graham County is also home to the Arizona Salsa Trail and the annual Salsa Fest.

Joseph Knight Rogers, an early settler in the area, and a member of the Arizona Territorial Legislature, is known as the father of Graham County. He introduced the bill in the territorial legislature creating Graham County. Graham County was created from southern Apache County and eastern Pima County on March 10, 1881. Initially, the county seat was located in the city of Safford but was later moved to Solomonville in 1883. This change was undone in 1915, returning the county seat to Safford.

Graham County is named after the mountain by the same name and was the first Arizonan county to break the tradition of naming counties for Native Americans. 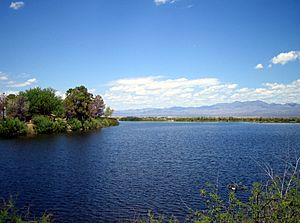 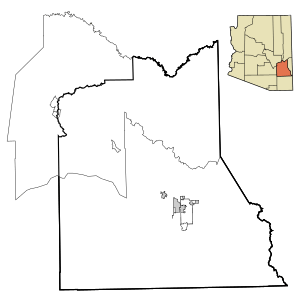 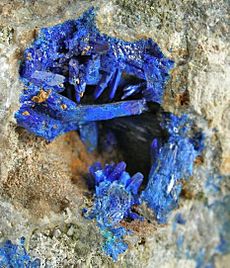 Linarite specimen from the old Grand Reef mine near Klondyke.

The population ranking of the following table is based on the 2010 census of Graham County.

All content from Kiddle encyclopedia articles (including the article images and facts) can be freely used under Attribution-ShareAlike license, unless stated otherwise. Cite this article:
Graham County, Arizona Facts for Kids. Kiddle Encyclopedia.