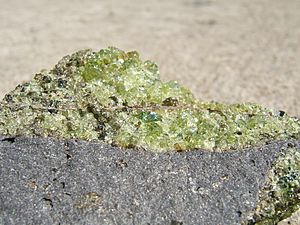 Peridot in basalt, found near Peridot

Peridot (Western Apache: Tséé Dotłʼizh "Blue Rock") is an unincorporated community and census-designated place (CDP) in Gila and Graham counties in the U.S. state of Arizona. The population was 1,350 at the 2010 census.

Peridot is named for the mineral peridot, found in basalt flows nearby.

According to the United States Census Bureau, the Peridot CDP has a total area of 5.2 square miles (13.4 km2), all of it land.

There were 307 households, out of which 50.2% had children under the age of 18 living with them, 55.4% were married couples living together, 20.5% had a female householder with no husband present, and 14.7% were non-families. 12.4% of all households were made up of individuals, and 3.6% had someone living alone who was 65 years of age or older. The average household size was 4.12 and the average family size was 4.50.

Nice specimens of the mineral peridot can be collected in the volcanic hills between Peridot and Globe, or purchased at local rock shops.

After wet winters, the Peridot area often has fine displays of spring wildflowers.

Note that any travel off the main highways require a tribal recreation permit, available from the San Carlos Recreation and Wildlife department, and at local convenience and sporting-goods stores.

In 2011, the San Carlos Apache Tribe's Language Preservation Program, located in Peridot, began its outreach to the 14,000 tribal members residing within the districts of Bylas, Gilson Wash, Peridot and Seven Mile Wash.

All content from Kiddle encyclopedia articles (including the article images and facts) can be freely used under Attribution-ShareAlike license, unless stated otherwise. Cite this article:
Peridot, Arizona Facts for Kids. Kiddle Encyclopedia.