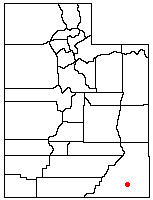 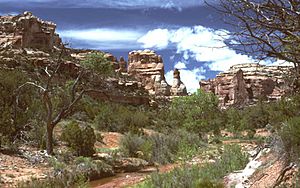 This large difference in elevation has led to the formation of numerous canyons, cliffs, and other erosional features on the edges of the mesa. To the east are several canyons draining into Comb Wash, including Arch, Texas, Mule, Owl, Fish, McCloyd, and Road Canyons. Scattered throughout these canyons are cliff dwellings of the Ancient Puebloans.

To the southeast is an eroded area called the Valley of the Gods, and to the southwest is a deep gorge of the San Juan River, called the Goosenecks. High above, on the southern edge of Cedar Mesa, are Muley and Cedar Points. 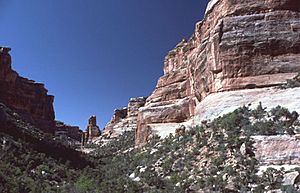 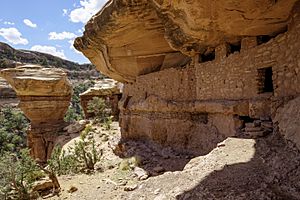 The west side of Cedar Mesa also includes large canyons, including John's and Slickhorn Canyons, and the combination of Grand Gulch and Bullet Canyon known as the Grand Gulch Primitive Area. To the northwest is the Natural Bridges National Monument and Stimper Arch.

State Route 95 crosses the northern part of Cedar Mesa, while U.S. Route 163 passes to the south. Running up the center of the mesa is State Route 261. Gravel and dirt roads provide access in dry weather to the individual canyons, through the Valley of the Gods, and to Comb Wash.

All content from Kiddle encyclopedia articles (including the article images and facts) can be freely used under Attribution-ShareAlike license, unless stated otherwise. Cite this article:
Cedar Mesa Facts for Kids. Kiddle Encyclopedia.