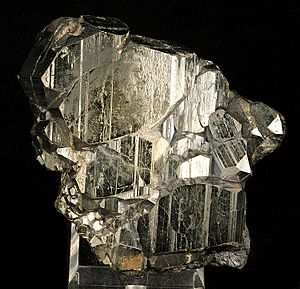 "Bravoite", Pyrite with a thin coating of Molybdenite, from the old Rico Argentine Mine.

Dolores County is the seventh-least populous of the 64 counties of the U.S. state of Colorado. As of the 2010 census, the population was 2,064. The county seat is Dove Creek.

It is thought that the area has been the site of human habitation since at least 2500 B.C. Dolores County's western portions were densely populated between 900 and 1300 AD. Population estimates of as many as 10,000 population, with villages of hundreds of rooms, have been made by archaeologists and other researchers. But this population was destroyed or migrated elsewhere, apparently following a drought and severe societal upheaval in the 14th century, and for centuries thereafter, both the western and eastern mountainous areas of the county were occupied mostly by nomads, including the Ute and the Navajo Indians. Like much of southwestern Colorado, Dolores County is rich in Indian ruins and sites of the Anasazi. According to the Anasazi Heritage Center, Dolores County contains at least 816 recorded archaeological sites as of 1989, with many more inventoried since that time.

Anglo trappers worked the mountains of eastern Dolores County as early as 1832-33, and gold was discovered in the County in 1866. But it was not until the area was taken from the Ute and removed from the Ute Reservation by the Brunot Agreement of 1878 that large-scale minerals exploration and mining began in the county, although the Pioneer Mining District was established (illegally) in 1876 in the Rico area. The development of the area was spurred by the discovery of large silver deposits near Rico in 1879, and the Rio Grande Southern Railroad was constructed through the County to connect Durango, Telluride, and Ridgway in 1890-92 The RGS served the eastern end of Dolores County until 1952 when it was abandoned. (The western portion of the county has never had railroad service.)

Rico's high point was in 1892, when the mining district population was more than 5,000; three times the current population of the entire county. The 1893 Silver Panic hit the town hard; by 1900 the population was 811. The mountainous area of Dolores County went through a series of booms and busts through the 20th Century. The low point of the community came in 1974 with an estimated population of 45; since then the town has become a bedroom community for Telluride and has limited tourism and subdivisions; the population has rebounded to almost 300. Efforts are underway in the early 21st Century to again begin major mining activities in the region.

Dove Creek was a way station on the Old Spanish Trail from the mid 19th century, for caravans and travelers moving between Santa Fe, Salt Lake City, and northern California and Nevada. The western portion of the county was used, beginning in the 1870s, for cattle ranching, but the lush grass soon suffered from overgrazing and then fire suppression, allowing the massive expansion of sagebrush, pinyon, and juniper. Homesteading in the area became common beginning in 1914, and dryland farming expanded throughout the Great Sage Plain. Today dryland farming of pinto beans and winter wheat is still a mainstay of the county's economy. But the development of irrigation using water from the Dolores Project in the 1980s, with the construction of McPhee Reservoir (immediately upstream in Montezuma County), has changed the history and population of the county.

Dolores County was created by the Colorado legislature on February 19, 1881, from the western portions of Ouray County, and was named for the Dolores River, which heads up in the county and passes through the county in the Dolores Canyon. The complete Spanish name was Rio de Nuestra Señora de los Dolores (River of our Lady of Sorrows), as reported by Father Silvestre Vélez de Escalante in 1776. Originally set in Rico, the first county courthouse was a 23x48 foot two storage log cabin, but was replaced by a stone and brick courthouse completed in 1883. the county seat was moved to Dove Creek in 1946, and the current courthouse built in 1957. (The original county courthouse in Rico is now the town hall and a branch of the public library.)

In 2009, Dolores County achieved notoriety as the most economically depressed county in Colorado. 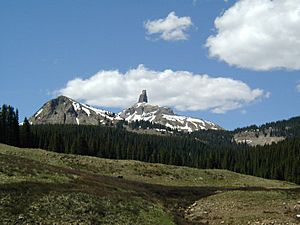 Dolores County, like other counties in Colorado along its border with Utah, is split into two geographically distinct regions, and in fact, under normal travel conditions, it is necessary to leave the county to travel between the two regions. The western portion of the county (east of the Dolores River Canyon and along the Utah border) is the northern portion of the Great Sage Plain, relatively low (6500–7500 feet in elevation) and flat (but cut by large canyons, including that of the Dolores River itself), and consists of irrigated and dryland farming areas; it is especially well known for the cultivation of various varieties of beans, including pinto beans and many variety of old Anasazi beans. The central portion of the county has higher open grasslands with forested hills, ravines, and canyons, used for livestock raising. The eastern portion of the county is located in the highest peaks of the San Juan Mountains, around the old mining and modern tourist town of Rico, and except for cattle grazing in the San Juan National Forest, has virtually no agriculture, in part because its elevations range from 9,000 to 14,000+. Rico is developing in many ways as a bedroom community for the much wealthier town of Telluride in San Miguel County to the north.

The only airport is the privately owned Dove Creek Airport east of Dove Creek; a general aviation facility with a 4,000-foot (1,200 m) runway. The nearest commercial service is located at Cortez Municipal Airport to the south, and San Juan (UT) County Airport north of Monticello.

In the 3rd Quarter of 2009, county unemployment was 13.1%, the worst in Colorado, and up from 7.3% in 2008. Average weekly wages were $489. Many residents of the county commute to San Miquel County (Telluride) or Montezuma County (primarily Cortez and rural-area industries and commercial establishments).

All content from Kiddle encyclopedia articles (including the article images and facts) can be freely used under Attribution-ShareAlike license, unless stated otherwise. Cite this article:
Dolores County, Colorado Facts for Kids. Kiddle Encyclopedia.