San Juan County is one of the 64 counties of the U.S. state of Colorado. As of the 2010 census, the population was 699, making it the least populous county in Colorado. The county seat and the only incorporated municipality in the county is Silverton. The county name is the Spanish language name for “Saint John”, the name Spanish explorers gave to a river and the mountain range in the area. With a mean elevation of 11,240 feet (3426 meters), San Juan County is the highest county in the United States.

Mining operators in the San Juan mountain area of Colorado formed the San Juan District Mining Association (SJDMA) in 1903, as a direct result of a Western Federation of Miners proposal to the Telluride Mining Association for the eight-hour day, which had been approved in a referendum by 72 percent of Colorado voters. The new association consolidated the power of thirty-six mining properties in San Miguel, Ouray, and San Juan counties. The SJDMA refused to consider any reduction in hours or increase in wages, helping to provoke a bitter strike.

San Juan county is the only county outside of Alaska where walking is the most common form of commute to work. As of 2013, 33% of residents walked to work, 18% drove alone, 19% carpooled, and 18% bicycled, though the small population size introduces considerable margins of error to these statistics. 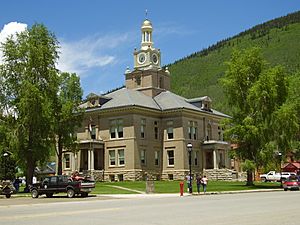 All content from Kiddle encyclopedia articles (including the article images and facts) can be freely used under Attribution-ShareAlike license, unless stated otherwise. Cite this article:
San Juan County, Colorado Facts for Kids. Kiddle Encyclopedia.