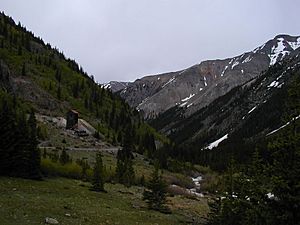 Bonanza-Empire Chief mine and mill, on the Alpine Loop. The mill ruins were stabilized in 2000 by the Bureau of Land Management and Hinsdale County Historical Society. In 2007–2008, the mill ruins were demolished by an avalanche.

Hinsdale County is one of the 64 counties of the U.S. state of Colorado. As of the 2010 census, the population was 843, making it the third-least populous county in Colorado. With a population density of only 0.75 inhabitants per square mile (0.29/km2), it is also the least-densely populated county in Colorado. The county seat and only incorporated municipality in the county is Lake City. The county is named for George A. Hinsdale, a prominent pioneer and former Lieut. Governor of Colorado.

Hinsdale County is one of the most remote counties in Colorado and the United States. The county is covered by mountains, including multiple fourteeners, and contains one of the most roadless areas in the country. The continental divide crosses the county twice. Most of the county is divided among several different national forests and the Weminuche Wilderness area.

There were 359 households out of which 23.4% had children under the age of 18 living with them, 61.0% were married couples living together, 4.7% had a female householder with no husband present, and 31.20% were non-families. 24.8% of all households were made up of individuals and 3.1% had someone living alone who was 65 years of age or older. The average household size was 2.2 and the average family size was 2.6. 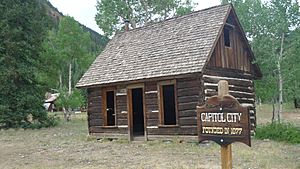 Capitol City, Colorado, a ghost town on the Alpine Loop National Scenic Back Country Byway. Capitol City once had a population of 400; its founders wanted it to become the capital of Colorado. The post office, some outbuildings, and brick kilns remain.

All content from Kiddle encyclopedia articles (including the article images and facts) can be freely used under Attribution-ShareAlike license, unless stated otherwise. Cite this article:
Hinsdale County, Colorado Facts for Kids. Kiddle Encyclopedia.