Dove Creek is a Statutory Town that is the county seat and the most populous municipality of Dolores County, Colorado, United States. The town population was 635 at the 2020 United States Census. The community takes its name from the nearby Dove Creek. Dove Creek is the self-proclaimed Pinto Bean Capital of the World.

The town is located on US 491 (formerly US 666) at the crossing of Dove Creek, the town's namesake. Dove Creek flows south to Cross Canyon, Montezuma Creek, Utah, and the San Juan River. The town is located on the northern portion of the Great Sage Plain, a large plateau covered in desert lands, bounded by the La Plata Mountains, Mesa Verde National Park, the La Sal Mountains, and the Abajo Mountains, and cut by dozens of deep canyons, which was and is a productive agricultural region. The plateau is dotted with numerous ruins of the Anasazi and other ancient people who took advantage of good soils and terrain, even with limited water resources.

The Dolores County Courthouse, built in 1957, replaces a temporary courthouse in the town used after voters of the county moved the county seat from Rico to Dove Creek in 1947, reflecting a shift in the original mining-oriented make-up of the county's population to the current situation in which farmers and a few ranchers outnumber the mountain-dwellers in the old mining districts of the eastern end of Dolores County. The courthouse is adjacent to Dolores County High School, and is part of the old business district located north of US 491; most business is now located on US 491 as it angles through the town from east-southeast to west-northwest. A regional landmark is the large concrete bean elevator located on the west edge of town, near the Dolores County Industrial Park.

SH 141 intersects US 491 just west of town, and provides access to the Paradox Valley, Nucla-Naturita, and the uranium mining and industrial area of Montrose County, Colorado, and Grand County, Utah. 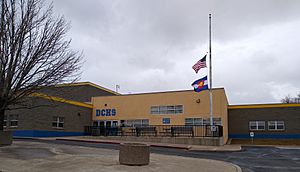 There were 285 households, out of which 31.2% had children under the age of 18 living with them, 54.4% were married couples living together, 13.0% had a female householder with no husband present, and 28.8% were non-families. 26.0% of all households were made up of individuals, and 14.4% had someone living alone who was 65 years of age or older. The average household size was 2.45 and the average family size was 2.93.

The Old Spanish Trail trade route passed through the area of Dove Creek from 1829 into the 1850s.

A post office called Dove Creek has been in operation since 1915. The community takes its name from nearby Dove Creek.

There are several area prehistoric and historic sites listed on the Colorado State Register of Historic Properties: 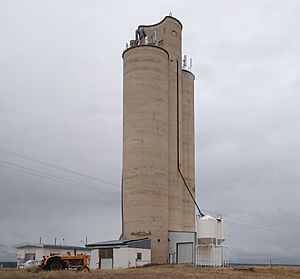 Pinto bean silo to the west of Dove Creek

The Dolores County Industrial Park is located west of Dove Creek and is the site of a plant which began construction in 2007, which produces food-grade vegetable oil from sunflowers, safflower, and canola grown in the Dove Creek area, and will ultimately produce biodiesel. The industrial park is home to the community's first ready-mix plant in many decades, and other businesses. New housing developments have been permitted and platted in the Dove Creek area, anticipating growth due to efforts like this. On the eastern edge of the town is the headquarters and facility of Adobe Milling, a company marketing various locally-grown beans and other traditional Southwestern foods.

Major employers in the town include the county government and school district, and various other government agencies. Most businesses in town support agricultural operations; some provide transportation services for highway users.

All content from Kiddle encyclopedia articles (including the article images and facts) can be freely used under Attribution-ShareAlike license, unless stated otherwise. Cite this article:
Dove Creek, Colorado Facts for Kids. Kiddle Encyclopedia.