Canyons of the Ancients National Monument facts for kids

Canyons of the Ancients National Monument is a national monument protecting an archaeologically-significant landscape located in the southwestern region of the U.S. state of Colorado. The monument's 176,056 acres (71,247 ha) are managed by the Bureau of Land Management, as directed in the Presidential proclamation which created the site on June 9, 2000. Canyons of the Ancients National Monument is part of the National Landscape Conservation System, better known as the National Conservation Lands. This system comprises 32 million acres managed by the Bureau of Land Management to conserve, protect, and restore these nationally significant landscapes recognized for their outstanding cultural, ecological, and scientific values. Canyons of the Ancients encompasses and surrounds three of the four separate sections of Hovenweep National Monument, which is administered by the National Park Service. The monument was proclaimed in order to preserve the largest concentration of archaeological sites in the United States, primarily Ancestral Puebloan ruins. As of 2005, over 6,000 individual archeological sites had been identified within the monument.

Canyons of the Ancients National Monument is located 9 miles west of Pleasant View, Colorado in southwestern Colorado. The monument's northern and eastern boundaries are canyons. Its western boundary is the Colorado-Utah state border. Lands south are bordered by the Ute Mountain Reservation and McElmo Creek. 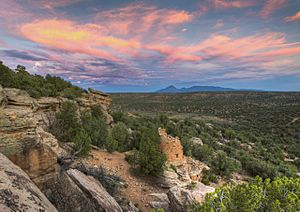 Canyons of the Ancients residents

For a fuller understanding of the architecture and life style during this period, pueblo buildings in the Mesa Verde region were built with stone, windows facing south, and in U, E and L shapes. The buildings were located more closely together and reflected deepening religious celebration. Towers were built near kivas and likely used for look-outs. Pottery became more versatile, including pitchers, ladles, bowls, jars and tableware for food and drink. White pottery with black designs emerged, the pigments coming from plants. Water management and conservation techniques, including the use of reservoirs and silt-retaining dams also emerged during this period.

As refinements in construction techniques increased, the Puebloans built larger pueblos, or villages, on top of the pit-houses starting about AD 1090. Lowry Pueblo had just a few rooms and 2 kivas in 1090 and the village was expanded two times about 1103 and 1120 until it had 40 rooms, 8 kivas and one great kiva.

Like their ancient neighbors at Hovenweep National Monument and Mesa Verde National Park, the Lowry Pueblo dwellers were farmers and hunters. They grew beans, corn and squash and raised turkeys. They also made and decorated pottery.

At least 6,000 distinct structures have been identified in the monument, and the density of archeological remains is the highest of any region in the United States. The vast majority of stone structures in the national monument are from the Ancient Puebloans era.

More than 20,000 sites have been identified, in some places more than 100 sites per square mile. After building basic pit style structures at first, the Puebloans later built villages with cliff dwellings. Archaeological ruins also include Sweat lodges, kivas, shrines and petroglyphs. Reservoirs with stone and earthen dams, including spillways and also numerous check dams, built in case of flash floods. Stone towers which may have been lookout or sentry posts, are found scattered throughout the monument.

Unlike other Ancient Pueblo site abandonment, it appears that the people of the Canyons of the Ancients left the sites much earlier than their neighbors, some time in the mid-12th century. Some of the artifacts found from the site show a connection to the Chacoan culture, while others are similar to those of the Mesa Verde dwellers.

After 1300, hunter-gatherers, ancestors of the Ute and Navajo, moved into the southwestern Colorado and southeastern Utah and came to inhabit the region.

During this period, the Spanish colonial reach extended to northern New Mexico, where they settled in the 16th century. They introduced items for trade, such as guns and horses, new and deadly diseases, and cultural influence in the forms of religion, language, and forms of government. In the 18th century, Spanish missionaries visited the area looking for a route to Spanish missions in California. One of the expeditions was that of Spanish friars Silvestre Vélez de Escalante and Francisco Atanasio Domínguez who traveled from New Mexico, through western Colorado to Utah.

The first Anglo American people arrived in the early 19th century, starting with trappers. With the discovery of precious ores in the last decades of the 19th Century, miners and other settlers moved into the region. By the mid-19th century, the United States government and Native American tribes were at war over land ownership. People were forced to leave their homelands. The Navajo had moved south and the Ute territory was significantly reduced.

Lowry Pueblo was excavated in 1928 and went through a restoration process in 1965. Two years later, it was named a National Historic Landmark and was listed on the National Register of Historic places. 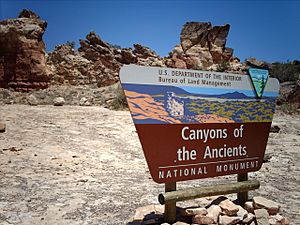 Entrance sign for the monument, with a rock formation

Canyons of the Ancients National Monument

The U.S. Bureau of Land Management administers the monument and enforces regulations balancing resource protection with land conservation. It was created by executive proclamation in 2000 with the intention of protecting the archaeological, natural and geological resources. Facilities at the Lowry Pueblo include parking, a picnic area, toilet and trail. Sand Canyon Pueblo also has a trail, which leads to McElmo Canyon.

While other national monuments in the Southwest, including Hovenweep, were limited to the area around major ruins, "Canyons of the Ancients was perhaps the first to explicitly recognize that ruins do not tell the entire story—that ancients lived in, hunted, gathered and raised crops, and developed water and religious sites throughout the larger landscape,” according to Secretary of the Interior Bruce Babbitt.

There are three Wilderness study areas in the monument:

Anasazi Heritage Center and Canyons of the Ancients visitor center 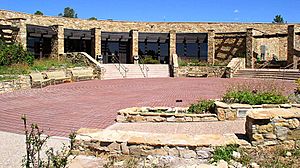 Vandalism and treasure hunting are difficult to minimize due to an inadequate number of federal employees and law enforcement personnel to monitor and prosecute those who deface ruins or steal archeological remains. Thousands of undocumented artifacts have been removed from the monument and now reside in private collections. A news article in July 2006 reported that funding for the monument had decreased by almost 40% since 2004, and that a particularly severe looting episode occurred in January 2006.

The northern part of the Monument in part has gently sloping, relatively even surfaces ranging in elevation from about 6,700 feet (2,000 m) in the east to about 6,000 to 5,500 feet (1,800 to 1,700 m) in the west. These surfaces are upheld by sedimentary rocks of Cretaceous age that are mostly covered by much younger gravel and sand layers deposited in the last several million years. The region is incised by canyons that drain south and west to McElmo Creek; the creek falls from the east at about 5,800 to 4,800 feet (1,800 to 1,500 m) west at the Utah border. The oldest rocks are exposed in McElmo Canyon and are sedimentary layers of Jurassic age. In and near the Monument, these sedimentary rocks have been bent upwards to form a dome, the McElmo Dome: most of the Jurassic rocks are below the surface in the regions immediately bordering the area. The southern boundary of much of the Monument lies just north of McElmo Creek. The Ute Mountains to the south are cored by igneous intrusions and rise to 9,979 feet (3,042 m).

Formations from the Cretaceous and Jurassic periods

The following description of the geology of the Monument is derived mostly from contributions to Anderson et al. (1997), unless otherwise referenced. The nomenclature of the rock units here may not represent the present consensus. The sedimentary sequence is over 1,500 feet (460 m) thick and is represented by the stratigraphic units listed below.

Carbon dioxide is produced from rocks of Mississippian age (Carboniferous Period 359.2–299 million years ago) in the McElmo Dome, from wells drilled to a depth of about 8,000 feet (2,400 m). The dome contains one of the largest deposits of carbon dioxide in the United States, and the extracted gas is used for enhanced oil recovery. This carbon dioxide reservoir has been studied to learn about possible underground storage (carbon sequestration) of carbon dioxide.

In 1986, the area was designated as the Anasazi Area of Critical Environmental Concern by the Bureau of Land Management to ensure there are no new leases for oil and gas industry; Leases will only be given to promote the conservation of oil and gas resources.

85% of the monument was under lease by ranchers and oil and gas exploration entities in 2000. With only 2,000 acres of monument land that is not leased, and that land home to ancient archaeological sites and wildlife habitat, four environmental groups have been active to ensure there is no further oil and gas exploration and extraction. However, off-road vehicles and an increase in road construction for oil and gas exploration, allow greater access to archeological areas. Large trucks known as "thumpers" were found searching for oil and gas pockets by pounding the earth and recording the seismic data, having received a green light from the Bureau of Land Management. Executive Director of the San Juan Citizens Alliance, Mark Pearson stated:

The decision showed a blatant disregard for the proclamation [that states that leases should only be made to protect and preserve oil and gas resources]. That does not bode well for the future management for the rest of this monument or any monument in the country.

In 2006, the National Trust for Historic Preservation reported that the nation's push for energy resources on federal land is occurring at a cost of archaeological and cultural resources at Canyons of the Ancients National Monument and Utah's Nine Mile Canyon. The National Trust further asserted that the Bureau of Land Management has only documented 17 million acres of the 262 under its stewardship.

With an emphasis on conservation, protection and restoration, the National Landscape Conservation System and Canyons of the Ancients National Monument represent a new era of management for the BLM. After 130 years of exploration and research identifying tens of thousands of irreplaceable and fragile archaeological sites, we know that Canyons of the Ancients represents the best of our cultural heritage. Using an army of volunteers who contribute on the ground services and applying the principles of balanced management and science-based decision-making, this crown jewel preserves ancestral homes and landscapes for Native American citizens and for children and communities throughout the United States.

Wildlife and plant habitat are threatened by increased road and building construction by oil and gas interests.

All content from Kiddle encyclopedia articles (including the article images and facts) can be freely used under Attribution-ShareAlike license, unless stated otherwise. Cite this article:
Canyons of the Ancients National Monument Facts for Kids. Kiddle Encyclopedia.