The City of Cortez is a Home Rule Municipality that is the county seat and the most populous municipality of Montezuma County, Colorado, United States. The city population was 8,482 at the 2010 United States Census. 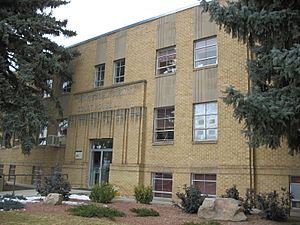 In 1886, the town was built to provide housing for the men working on the tunnels and irrigation ditches required to divert water out of the Dolores River and into Montezuma Valley. The town was named for Spanish conquistador Hernán Cortés.

It is a popular stop for tourists, who stay there because of its central location among surrounding attractions, such as Mesa Verde National Park, Monument Valley, and the Four Corners.

There are many prehistoric sites in the Cortez area, listed on the Colorado State Register of Historic Properties or both the state register and the National Register of Historic Places: They include large parks or centers, such as Crow Canyon Archaeological Center, Hovenweep National Monument, and Mesa Verde National Park. There are also smaller or individuals sites, such as Cowboy Wash, Hawkins Pueblo and cliff dwellings, Lowry Ruin, Mitchell Springs Archeological Site, also known as the Mitchell Springs Ruin Group, Mud Springs Pueblo, and Yucca House National Monument. Within the McElmo Drainage Unit (AD 1075-1300) is Cannonball Ruins, Maxwell Community, Roy's Ruin, Sand Canyon Archaeological District, and Wallace Ruin.

There following are trails or byways through the Cortez area:

A Lockheed U-2 reconnaissance aircraft made an emergency nighttime forced landing August 3, 1959, at the Cortez Municipal Airport. Major H. Mike Hua (now retired as General) was on a training flight originating at Laughlin AFB, Texas; the U-2 aircraft engine flamed out at 70,000 feet MSL. Maj. Hua established best glide and was able to navigate through a valley to a lighted airport that wasn't on his map nor did he know of its existence beforehand. The airport was the only one in the area with a lighted runway which was illuminated overnight.

Cortez has a cold and continental semi-arid climate with hot summer days and cold winter nights, the latter a result of its elevation.

There were 3,590 households out of which 30.8% had children under the age of 18 living with them, 42.0% were married couples living together, 14.8% had a female householder with no husband present, and 37.8% were non-families. 30.0% of all households were made up of individuals and 12.7% had someone living alone who was 65 years of age or older. The average household size was 2.33 and the average family size was 2.92.

All content from Kiddle encyclopedia articles (including the article images and facts) can be freely used under Attribution-ShareAlike license, unless stated otherwise. Cite this article:
Cortez, Colorado Facts for Kids. Kiddle Encyclopedia.