Yucca House was established as a national monument in 1919, by President Woodrow Wilson's Proclamation No. 1549.

Yucca House National Monument is located in the Montezuma Valley at the foot of Sleeping Ute Mountain, called "mountain with much yucca growing on it" by the Ute people, and inspiration for the name of the national monument.

The site is one of many Ancestral Pueblo (Anasazi) village sites located in the Montezuma Valley occupied between AD 1100 and 1300 by 13,000 people. A 2020 summary stated that the unexcavated "pueblo village has the ruins of 600 rooms, 100 kivas, several towers, multiple plazas, unexplained structures and one great kiva".

Nearby were the ancient pueblo village of Mud Springs at the head of McElmo Canyon and Navajo Springs, was the original site of the Ute Mountain Indian Agency south of Sleeping Ute Mountain in the early 1900s.

Like other nearby Ancient Pueblo peoples, the Yucca House pueblo dwellers abandoned their homes, but because a major excavation has not been completed it is not known when, or if there is a relationship between these people and those of nearby pueblo settlements.

The site was first described by W. H. Jackson in 1874; he had been a member of the Hayden Geological Survey of 1871. Since that time, the following archaeological studies have been conducted:

Holmes reports: "These ruins form the most imposing pile of masonry yet found in Colorado. The whole group covers an area of about 480,00 square feet, and has an average depth of from 3 to 4 feet. [...] The stone used is chiefly of the fossiliferous limestone that outcrops along the base of the Mesa Verde a mile or so away." 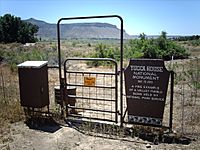 President Woodrow Wilson proclaimed the site a National Monument on December 19, 1919, by Proclamation No. 1549, on a 9.5 acre (38,000 m2) piece of land previously donated by Henry Van Kleeck, originally known as Aztec Springs; the name of the site was changed by the Proclamation. The size of the monument was increased to 33 acres in 1996 with land donated by Hallie Ismay. Since 1990, the monument has been managed by park service staff at Mesa Verde National Park. Hallie Ismay was an unofficial steward of the Yucca House site for 62 years.

As of 1919, the site was one of many research national monuments designated during that era to preserve the ruins, plants and animals in the Yucca House area.

As a National Park Service historic area, the park was administratively listed on the National Register of Historic Places on October 15, 1966.

After completion of the mapping project in 2000, the authors of the report provided this conclusion:

Although we now have a better sense of layout and spatial relationships among the architectural features at Yucca House, we still know relatively little about the length of the Yucca House occupation, the role of public architecture in the village, and the extent of social interaction and other relationships with nearby large villages.

Currently, there are no true interpretive features, facilities or fees at Yucca House. See the Visitor Guide for directions to the remote location. Parking space is limited and roads may be difficult immediately following rains or snowmelt.

A 2017 report stated that fewer than 1,000 people visited the monument annually. A visitor in 2018 provided this summary of the experience at Yucca House after arriving without a guide:

You can make out small parts of a wall here and there and see piles of stones, but the vegetation covers the majority of the ruins and it is difficult to understand what you are seeing. A few interpretive signs would be helpful.

The owners of a property abutting the National Monument, Bernard and Nancy Karwick, offered to donate 160 acres of land that would significantly expand the 33 acres of the monument. The 2015 offer was tentatively accepted but required Congressional approval. By March 2020, the plan had been passed by the House and would move to the Senate. The bill sponsored by U.S. Rep. Scott Tipton was signed in 2021 and the expansion is expected to be carried out.

All content from Kiddle encyclopedia articles (including the article images and facts) can be freely used under Attribution-ShareAlike license, unless stated otherwise. Cite this article:
Yucca House National Monument Facts for Kids. Kiddle Encyclopedia.