Mexican Hat is a census-designated place (CDP) in Utah in the United States. It is on the San Juan River on the northern edge of the Navajo Nation's borders in south-central San Juan County. The population was 31 in the 2010 census, a sharp decline from the previous two censuses.

The name "Mexican Hat" comes from a curiously sombrero-shaped, 60-foot (18 m) wide by 12-foot (3.7 m) thick, rock outcropping on the northeast edge of town. The "Hat"' has two rock climbing routes ascending it. It has frequently been noted on lists of unusual place names. 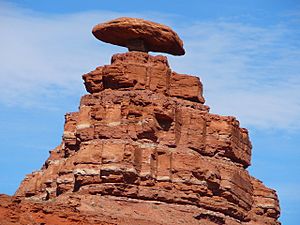 The CDP is on U.S. Route 163 just 3 miles (5 km) south of the junction with State Route 261, and is just outside the northern boundary of both the Navajo Nation and Monument Valley. Goosenecks State Park is located just 9 miles (14 km) west-northwest, Alhambra Rock is 6 miles (10 km) west-southwest, and the Valley of the Gods is to the north on U.S. 163. 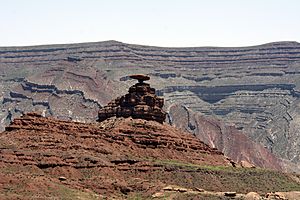 According to the Köppen Climate Classification system, Mexican Hat has a semi-arid climate, abbreviated "BSk" on climate maps.

There were 17 households, out of which 5.9% had children under the age of 18 living with them, 29.4% were married couples living together, 17.6% had a female householder with no husband present, and 47.1% were non-families. 64.7% of all households were made up of individuals, and 5.9% had someone living alone who was 65 years of age or older. The average household size was 1.82 and the average family size was 2.56.

As of 2012, the median income for a household in the CDP was $80,767, and there were no families or individuals living below the poverty line.

All content from Kiddle encyclopedia articles (including the article images and facts) can be freely used under Attribution-ShareAlike license, unless stated otherwise. Cite this article:
Mexican Hat, Utah Facts for Kids. Kiddle Encyclopedia.