Thompson Springs, also officially known for a time as just Thompson, is a small census-designated place in central Grand County, Utah, United States. The population was 39 at the 2010 census. The town is just north of the east-west highway route shared by Interstate 70, U.S. Route 6 and U.S. Route 50, between Crescent Junction and Cisco. Moab, the county seat, is 37 miles (60 km) to the south. Thompson Springs is located in high desert country at an elevation of 5,246 feet (1,599 m), with the Book Cliffs just to the north. The town's ZIP code is 84540.

Evidence of human habitation or use of the Thompson Springs area can be dated back to the Archaic Period, when beautiful Pictographs were left in Sego Canyon. Subsequent Anasazi, Fremont, and Ute tribes have also left their mark upon the area. 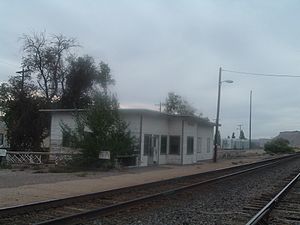 The former Thompson Station was last used in 1997

Thompson Springs was named for E.W. Thompson, who lived near the springs and operated a sawmill to the north near the Book Cliffs. The town began life in the late nineteenth century as a station stop on the Denver and Rio Grande Western Railroad (D&RGW), which had been completed through the area in 1883. A post office at the site was established in 1890, under the name "Thompson's." (The official designation by the United States Postal Service is still "Thompson".) The town was a community center for the small number of farmers and ranchers living in the inhospitable region, and it was also a prominent shipping point for cattle that were run in the Book Cliffs area. Stockmen from both San Juan and Grand counties used Thompson.

Thompson gained importance in the early twentieth century due to the development of coal mines in Sego Canyon, north of town. Commercial mining in Sego Canyon began in 1911, and that year the Ballard and Thompson Railroad was constructed to connect the mines with the railhead at Thompson. The railroad branchline and mines continued operating until about 1950.

For many years the city was served by various D&RGW passenger trains, including the Scenic Limited, the Exposition Flyer, the Prospector, the California Zephyr, and the Rio Grande Zephyr. Although Amtrak (the National Railroad Passenger Corporation) took over nearly all passenger rail service in the United States in 1971, the D&RGW continued service through the area until 1983. Subsequently, for the next fourteen years, the city was served by various Amtrak trains, including the California Zephyr, the Desert Wind, and the Pioneer.

Construction of I-70 two miles south of Thompson Springs drew traffic away from the city as the former Old Cisco Highway (US 6 and US-50) (now named Frontage Road) was no longer used. The later movement of the passenger train stop about 25 miles (40 km) to the west in Green River, Utah (Green River Station) in 1997 led to further economic hardship for Thompson Springs.

The original name for this settlement was Thompson Springs, a name that was reinstated in 1985. Much of the town is uninhabited today, although there are still some operating businesses in the immediate vicinity of I-70.

The Moab, Utah, Uranium Mill Tailings Remedial Action (UMTRA) Project is a uranium tailings removal and relocation project that promises to bring jobs to the area as tailings from the Atlas Mineral Company's tailings ponds outside of Moab will be moved to Crescent Junction, about 6 miles (9.7 km) west of Thompson Springs. 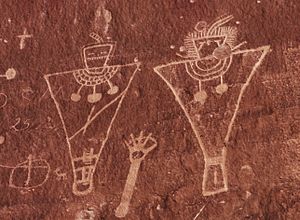 Thompson Springs is also the site of several well-preserved groups of pictographs and petroglyphs left by early Native Americans. The Fremont culture thrived from A.D. 600 to 1250 and was a contemporary with the Anasazi culture of the Four Corners area. There is also rock art from the Archaic period dating from 7000 B.C., the Barrier Canyon period from around 2000 B.C., and the Ute tribe dating from A.D. 1300.

All content from Kiddle encyclopedia articles (including the article images and facts) can be freely used under Attribution-ShareAlike license, unless stated otherwise. Cite this article:
Thompson Springs, Utah Facts for Kids. Kiddle Encyclopedia.