Moffat County is the northwesternmost of the 64 counties in the U.S. state of Colorado. As of the 2010 census, the population was 13,795. The county seat is Craig.

Moffat County was created out of the western portion of Routt County on February 27, 1911. The county was named for David H. Moffat, a Colorado tycoon who died in 1911. His railroad, the Denver, Northwestern & Pacific, attempted to build a route from Denver to Salt Lake City. In 1913, a reorganized railroad, the Denver & Salt Lake, reached as far as Craig, the county seat, but no further. In the late 1890s and early 1900s, all Colorado District Courts were held in Denver, Colorado, in the State courthouse there, due to a lack of funds to build courthouses locally. All murder trials were held in Denver, in the District Courts. Allegedly, so many politically motivated murders occurred between the predominantly liberal, then, eastern Routt County, Colorado residents and the predominantly conservative, then, western Routt County residents, that the presiding judges—tired of presiding over these murder trials—requested that the State legislature split Routt County into what is now Routt and Moffat County; the legislature complied. 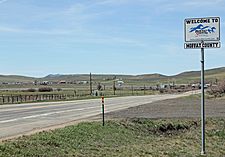 Entering Moffat County from the east on U.S. Route 40.

All content from Kiddle encyclopedia articles (including the article images and facts) can be freely used under Attribution-ShareAlike license, unless stated otherwise. Cite this article:
Moffat County, Colorado Facts for Kids. Kiddle Encyclopedia.