Daggett County ( DAG-ət) is a county in the northeastern corner of the U.S. state of Utah. As of the 2020 United States Census, the population was 935, making it the least populous county in Utah. Its county seat is Manila. The county was named for Ellsworth Daggett, the first surveyor-general of Utah. The small community of Dutch John, located near the state line with Colorado and Wyoming, became an incorporated town in January 2016.

Daggett County was formed in 1918. It received its name from Ellsworth Daggett, the first surveyor.

As of 2016, the largest self reported ancestry groups in Daggett County, Utah were: 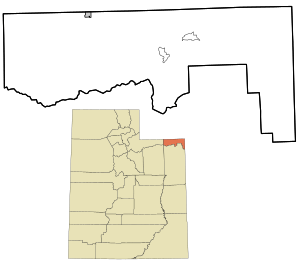 The few commercial establishments in Daggett County exist to service tourists and users of the Flaming Gorge National Recreation Area. Throughout the county there is one small general store, several gas stations, five cafes or restaurants, five inns/motels, and a few miscellaneous businesses that offer raft rentals. There are also businesses that offer guided fishing trips on the Flaming Gorge Reservoir and the Green River. The economy is primarily related to recreation, management of government land, and ranching. There are no railroads within Daggett County.

All content from Kiddle encyclopedia articles (including the article images and facts) can be freely used under Attribution-ShareAlike license, unless stated otherwise. Cite this article:
Daggett County, Utah Facts for Kids. Kiddle Encyclopedia.