Manila is a small city located on the northern edge of Daggett County, Utah, United States, just south of the Wyoming border. The town is at the junction of State Route 43 and State Route 44, and is the county seat of Daggett County. Nearby sites include the Flaming Gorge National Recreation Area and the Flaming Gorge Reservoir just east of town, and to the south is Ashley National Forest, which includes Kings Peak (13,528 ft), the highest point in Utah.

The population of Manila was 310 at the 2010 census. The settlement was named in 1898, commemorating the American naval victory at the Battle of Manila Bay in the Philippines. 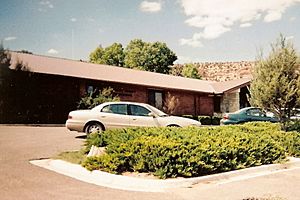 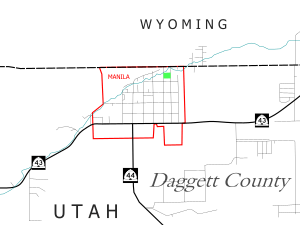 Map of the city limits and surrounding area

There were 105 households, out of which 21.0% had children under the age of 18 living with them, 51.4% were married couples living together, 6.7% had a female householder with no husband present, and 37.1% were non-families. 34.3% of all households were made up of individuals, and 11.4% had someone living alone who was 65 years of age or older. The average household size was 2.20 and the average family size was 2.83. 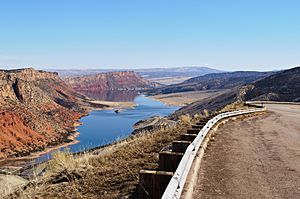 Manila is located in northeastern Utah, north of the Uinta Mountains and west of the Flaming Gorge Reservoir on the Green River. The northern border of the town is the Wyoming state line.

Manila has five streets which run east to west. The southernmost, and main east-west street, is Utah State Route 43, with the remaining four streets numbered sequentially south to north (1st through 4th Street). The primary north-south street is Main Street, and subsequent north-south streets in Manila are also numbered, with 1st East Street through 5th East Street to the east and 1st and 2nd West Street to the west. State Route 43 runs northeast 2.5 miles (4.0 km) to the Wyoming border, whereupon Wyoming Highway 530 continues north 44 miles (71 km) to the city of Green River. In the other direction from Manila, Route 43 leads west then north 8 miles (13 km) to the Wyoming border, beyond which Wyoming Highway 414 leads 45 miles (72 km) to Fort Bridger. Utah State Route 44 (Main Street) leads south then east from Manila 28 miles (45 km) to U.S. Route 191 near Red Canyon.

According to the United States Census Bureau, Manila has a total area of 0.89 square miles (2.3 km2), all of it land.

All content from Kiddle encyclopedia articles (including the article images and facts) can be freely used under Attribution-ShareAlike license, unless stated otherwise. Cite this article:
Manila, Utah Facts for Kids. Kiddle Encyclopedia.