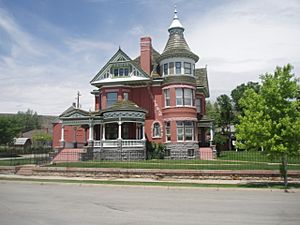 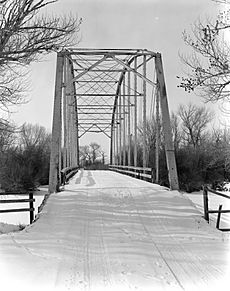 Pick Bridge over the North Platte River, near Saratoga. Listed on the National Register of Historic Places. 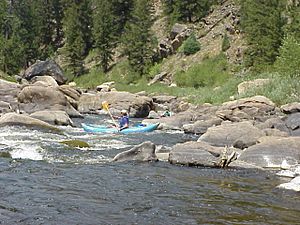 Carbon County is a county located in the U.S. state of Wyoming. As of the 2010 census, the population was 15,885. Its county seat is Rawlins. It is north from the Colorado state line.

Carbon County was organized in 1868.

Originally about 3,400 square miles (8,800 km2) in the center of Carbon County were once part of the Spanish Empire, then part of the Republic of Texas (1835-1845) and part of the State of Texas until 1852 when the northernmost part of that state was ceded to the U.S. government. This area is defined by the 42nd parallel on the north, and straight lines south from there to the headwaters of the Arkansas river on the east and the headwaters of the Rio Grande on the west. The documents defining that area include the Adams-Onís Treaty of 1819, the 1824 Constitution of Mexico, and the 1845 "Joint Resolution for the Admission of the State of Texas into the Union".

Carbon County was organized December 16, 1868, from Laramie County in Dakota Territory, which at the time had jurisdiction over part of modern-day Wyoming. It became a county in Wyoming Territory when that territory's government was formally organized on May 19, 1869.

George R. Salisbury, Jr., a rancher from Savery, represented Carbon County in the Wyoming House from 1975-1986. He was succeeded in office by his son-in-law and fellow Democrat, Patrick F. O'Toole, also a Savery rancher.

All content from Kiddle encyclopedia articles (including the article images and facts) can be freely used under Attribution-ShareAlike license, unless stated otherwise. Cite this article:
Carbon County, Wyoming Facts for Kids. Kiddle Encyclopedia.